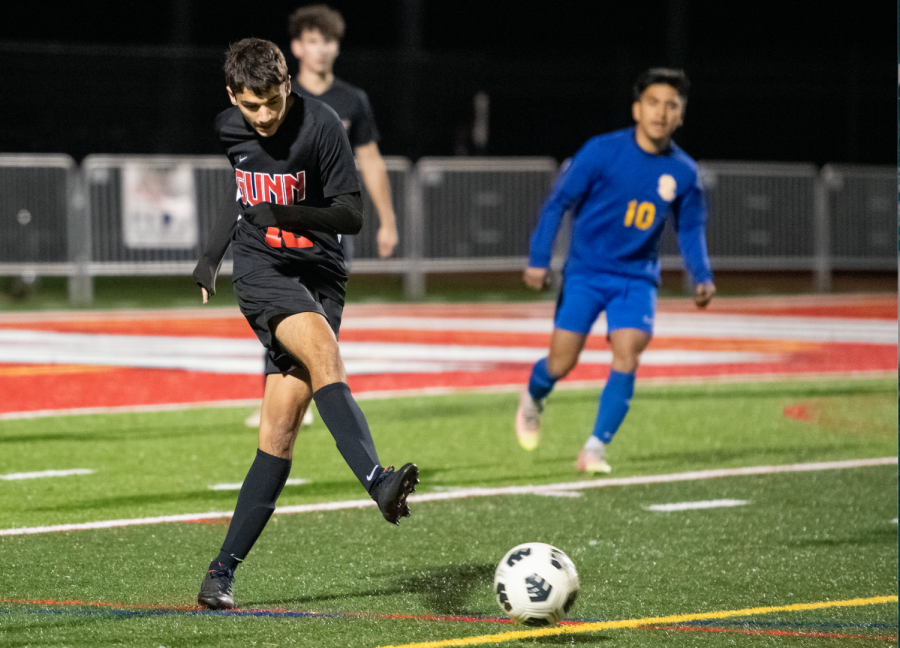 Her younger sister Vallory Kuelker has played basketball for over eight years. “I got into basketball because of watching my older sisters play,” she said. “I would always play in my sisters’ practices, just for fun.”

The Kuelkers are not the only sibling athletes at Gunn. Senior Jonathan Hardan and junior Jude Hardan, his brother, have been playing soccer together for the past 14 years. They are now teammates on the boys varsity soccer team. “My dad plays soccer, so he got us interested in the sport,” Jonathan Hardan said. “We felt a little bit obligated at first, but once we started liking it, it was completely our choice.”

The Kuelkers and Hardans have each trained with their siblings outside of school for years, but less so now that they are busier and on the same team at Gunn. Still, the Kuelkers enjoy the time that they spend practicing on campus. “During practices, Vallory and I were always the ones singing and dancing the most when we played music, and that was always super fun,” Mollie Kuelker said. “We’d just be embarrassing ourselves, but it was okay because we were doing it together.”

According to Vallory Kuelker, playing the same sport has benefited her and her sister. “I share some gear with Mollie and have gotten a lot of clothes handed down to me,” she said. “We’ve also been able to bond through playing since we can talk and hang out together more.” Jude Hardan agreed that sports have helped him bond with his brother. “I’m pretty lucky to have someone around the same age with the same interest,” he said. “[We] can spend a lot more time with each other.” Although the siblings share similar interests, they often get compared to each other. The Kuelkers are unbothered by this, though. “Other parents used to say a lot of things,” Mollie Kuelker said. “My mom would always tell them that we can’t be compared because we’re different players and positions. It has never made Vallory and me competitive on the court.”

The Hardan brothers also get compared to each other, yet they handle it just as well. “Our friends ask all the time,” Jude Hardan said. “Everyone’s like, ‘Who’s better?’”

According to Jonathan, the answer is clear. “It’s always me,” Hardan said. “I’m always better.”

Though the Hardans now play for the same team, they were once opponents in club soccer. “We were on different teams based on our ages,” Jonathan Hardan said. “But one time we got the chance to scrimmage, so I was playing against [Jude]. I remember putting in a pretty nasty tackle on him. It’s something funny that we always tell people.”

Since the Hardans now both play for Gunn, they take it as an opportunity to support each other. “We watch pretty much all of each other’s games, and we know each other’s coaches,” Jonathan Hardan said. “So we can sit on the bench with them and be with the team, and at halftime or during the game, we’ll yell instructions if they need help.”

The Kuelkers echoed this sentiment. Because they are on the same team, they assist each other in games. “Vallory and I work really well together on the court,” Mollie Kuelker said. “We know each other’s playing style, and it’s really easy to trust each other. We always know that someone has our back when we play together.”