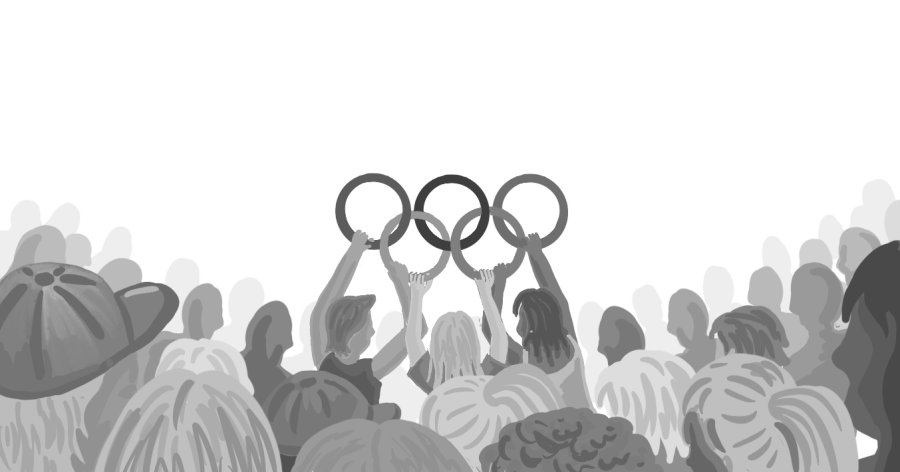 Sitting in a Zoom meeting, Reid is quick to tell a joke and impart a smile. She sports a black beanie, which her dark brown hair flows out of before laying gently on her shoulders. An assortment of silver rings wrap around her fingers, matching the gray color of her eyes. Yet what stands out most about Reid are her patriotic red and white fingernails. “There’s a salon here, so you can get your nails done or get a haircut,” she said. “There were a lot of translator apps involved so it ended up a little unsymmetrical but that is totally fine.”

As a competitor in the Biathlon, Reid skis with her rifle on her shoulders before stopping to take aim at targets. Reid explained the dichotomy between the two components of the event. “It’s a cross country ski race combined with precision marksmanship shooting, where you’re penalized if you miss a shot,” she said. “It could be a time penalty or it could be a skiing penalty. At the end of the race, the person with the shortest time wins.”

Though Reid now spends most of the year training for the Biathlon in the frigid mountains, many of her fondest memories of athletic competition start from participating in cross country at Gunn. “I would go over to Los Altos Hills and train and then come back and do the running training in the afternoon with my team,” she said.

As Reid ran under the sweltering California sun, she formed connections with her team. Reid noted how learning to be a part of a team helped her as she progressed further as an athlete. “That was the first time that I trained with a group,” she said. “Running has a lot of similarities to biathlon. It’s cardiovascular and it has a team aspect to it, so that was really foundational for me.”

Reid also competed in cross country skiing during high school, where she soon became one of the best high school skiers in the nation. During these four years Reid received numerous accolades, including winning two Junior National Championships and becoming a three time All-American skier.

Reid’s success as a high school skier culminated in her being recruited to ski for the University of Colorado Boulder (CU Boulder). At CU Boulder, she continued to excel in cross country skiing, becoming one of the most decorated skiers in the program’s history.

Yet, when the skis came off, Reid struggled at times to manage the grueling schedule of a student athlete competing at the top of her sport. Oftentimes, Reid would finish with a strenuous training session only to be greeted with a pile of homework when she got home. It was instances like these that taught Reid the importance of treating yourself with kindness. “I think personal forgiveness is important,” she said. “Sometimes you’re gonna miss the workout. Sometimes you’re going to miss your homework. You need to forgive yourself when that happens.”

It wasn’t until her senior year at CU Boulder when Reid was first introduced to the biathlon. After her grandfather was diagnosed with Alzheimers, Reid was given his old biathlon rifle. This moment inspired Reid to begin training for the Biathlon event in the 2018 Olympics.

The journey to the Olympics, however, wasn’t easy. Though Reid was already a strong cross-country skier, she had to learn rifle shooting from scratch. Additionally, to qualify for the Olympics, Reid had to go through a rigorous set of preliminary races. In order to make the team Reid had to first qualify in the American race in December. Qualifying for this race would allow her to compete in the European qualification round, after which she was offered a spot on the Olympic team.

Reflecting on the recent 2022 Olympic Games, Reid remains ambivalent. While she enjoyed competing in the Biathlon among some of the best in the world, the COVID-19 restrictions in place hindered her overall experience. “We’re in a closed loop,” Reid said. “We can’t wander, which has really been frustrating for a lot of us. I think some of us have gotten a little stir crazy.”

When Reid is competing, all of these other factors surrounding the Olympics disappear in her mind. Instead, she focuses on the minute details, like the way that her ski cuts through the snow and the feeling of the rifle against her shoulder. It is in focusing on these details that Reid finds the calmness needed to compete at the highest level. “When you actually get out there and you are doing your sport, it’s the same there as it is in every place,” she said. “The shooting mounts are there, the targets are there, the rifle rocks are there, the ski trails are there, and just taking all of your external stress and refocusing it on to this is what I do. This is what I’m good at. This is why I’m here.”

Even though Reid has largely been successful in dealing with pressure that comes with the Olympics, she still feels that she is currently in a slump in regards to the rifle shooting aspect of the Biathlon. “Overtime I think you hit a point where you either have to go through a slump and reassess yourself, or you end up quitting,” she said. “I’ve actually kind of hit that this year. My standing shooting has been rocky for a couple months now, and it’s definitely in my head because I can shoot in specific races but not others.”

A lifetime of athletics, however, has taught Reid the importance of having a positive mindset. “It can be really hard to look at a result—be it sports or be it a grade—and untangle it from what actually went on there,” she said. “It’s important to continually tell yourself out loud that results are not the same as performance. In the end, all that matters is that you did the best you could even if not everything went to plan.”