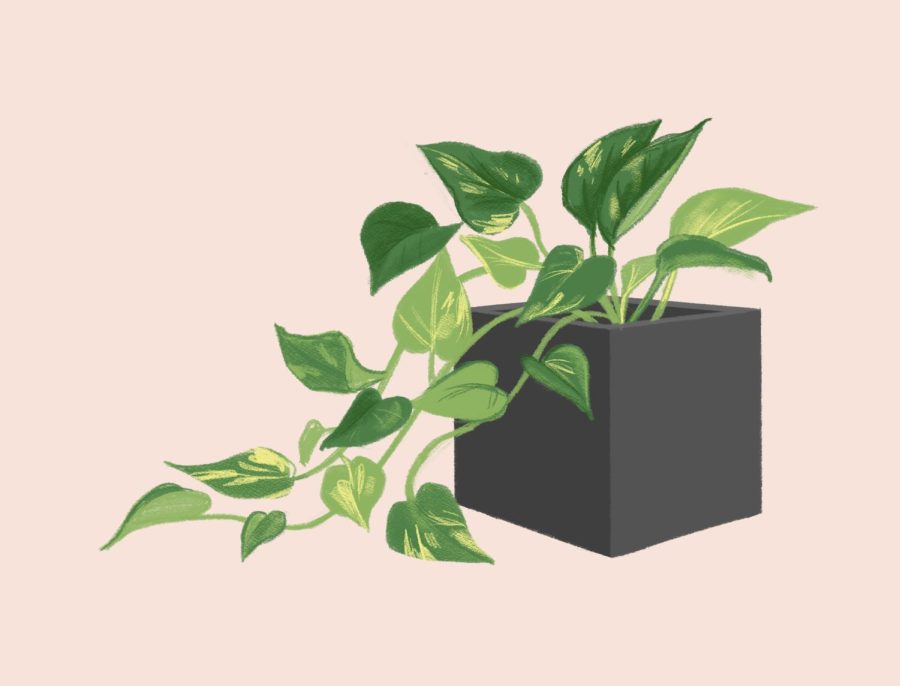 The large, glossy leaves of Aspidistra elatior give it the aesthetic of a Spanish-tiled courtyard on a Pinterest board. Yet, its subtle beauty and simplicity conceals its indestructibility.

Aspidistra elatior, also known as the cast-iron plant, was first introduced to Europe from Japan and Taiwan in the 1820s—the age of gas lighting. Though gas lighting was efficient, its detriments were vast. Gas-powered lighting left soot over houses and blackened ceilings, creating a toxic environment for residents. And yet, while ordinary plants shriveled and died in these conditions, the cast-iron plant survived and became a new house favorite.

Today, cast-iron plants continue to thrive on their owners’ neglect, only requiring water once every two weeks. One downside, however, is their rubber-like leaves, which can sometimes collect dust and invite little critters. A good way to prevent such a situation is to water your plant shower-style with a watering can or even gently clean off build-up with a sponge, like cleaning a green, leafy baby. The plant also flourishes in warmer climates, ranging from 60 to 80 degrees Fahrenheit, making it the perfect Palo Alto plant. As the Victorians did then, Californians can now enjoy the simple beauty of owning a cast-iron plant.

Aloe vera, a species of aloe, is classified as a succulent. The use of this tough, prehistoric plant dates back to 3000 B.C. It was used as a healing herb in ancient China and Sumer to reduce inflammation, relieve pain and treat burns. To say the least, the plant has been critical to the development of modern medicine.

Since then, the uses of aloe vera have only expanded. In the 21st century, they are used not just to treat painful sunburns, but also to ingest in a sweet drink found in supermarkets. Although its fleshy green foliage is still known for its pharmaceutical purposes, it makes a great plant to keep, whether it’s used for home remedies or not.

Similar to the cast-iron plant, aloe vera thrives in warm climates and originates from the Arabian Peninsula. Because of its development in an arid environment, as a houseplant, the evergreen perennial only needs to be watered once every three weeks, and even less so in the winter months.

Aloe vera loves forgetful people, and with its artful spikes and spiral configuration, the plant has a pleasant mesozoic-yet-modern feel, which can add atmosphere to any space.

Devil’s ivy, or golden pothos, is a tropical vine native to the Solomon Islands, which are located in Northeast Australia. This climbing plant has delicate heart-shaped leaves with bright streaks of yellow and is the perfect houseplant for beginners.

Devil’s ivy is accessible and affordable with prices around $5 to $25 at the local supermarket. It typically thrives in smaller planters, but the standard pot, which holds around three quarts of soil, should be able to sustain a very large devil’s ivy
plant.

Maintaining the devil’s ivy is extremely simple. It only needs a small amount of water when the soil is dry to the touch. The devil’s ivy also flourishes with minimal pruning, creating a bushier plant. It’s best to place the plant in indirect sunlight.

With those long, leafy vines, the ivy is great to plant in hanging pots or to grow around a moss pole. However, to pet owners interested in purchasing the plant, it is important to keep in mind that it is toxic to dogs and cats. The leaves and stem contain calcium oxalates, which are deadly to animals when ingested in large amounts. Other than that, happy planting!

Dirt is messy. It is often associated with energetic dogs that leave dirt or mud all around the house. Owning potted plants runs the risk of ruining your carpet if the door slams a little too hard and knocks over a planter. The danger that dirt brings to personal items and clean houses is simply too great for some. Some dread bringing plants into their homes for fear of staining their favorite
furniture; for those people, there is a solution: air plants.

Air plants, scientifically known as tillandsia, are mess-free, require minimal water and are the ultimate choice for those who wish for a quiet, low-maintenance friend. Who doesn’t need one of those? Air plants only need to be watered once a week and take nutrients from the air around them. There are over 450 different types of tillandsia in different shapes and sizes, half of which look like they come out of a desert sci-fi movie.

With its pleasant blue-purple-green hues, air plants love to be hung in bathrooms and kitchens, where they can best absorb moisture and steam. Air plants: everyone’s favorite mess-free house plant and unproblematic friend.