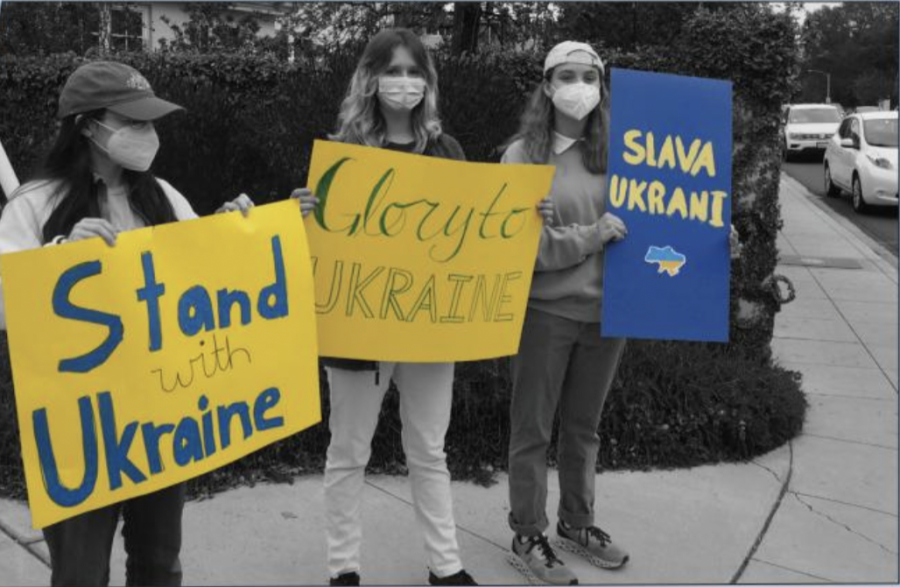 “Slava! Ukraine!” These shouts, along with “Free Ukraine” and “Honk for Ukraine” echoed across Arastradero on Friday, March 25, accompanied by the sounds of passing cars honking in agreement. The protest, organized and attended by roughly 15 students of the Social Justice Pathway (SJP) and SJP teacher Jason Miller, is just one part of the
larger community response to the ongoing war in Ukraine.

On Feb. 24, 2022, Russia invaded Ukraine. The two nations have a history of conflict, which can most recently be dated back to the Russian annexation of Crimea—an ethnically Russian peninsula bordering both Russia and Ukraine—in 2014. Now, eight years later, the conflict has escalated to a full-scale war, and its effects have rippled worldwide. At Gunn, it has fostered discussions about both its short-and long-term impacts, inspiring students to create change.

The war’s effect is most dominant in social studies classrooms, where discussion of current events is consumed by the ongoing war and lessons have shifted focus to draw
parallels with the present. Rather than proceeding with her curriculum, U.S. Foreign Policy teacher Tara Firenzi has put the current war at the forefront of her class discussions. “We talk about it every day,” she said. “Some days, we’ve actually devoted the entire class period to it. But most days, we have 10 minutes to check in about any new developments.”

Similarly, Social Studies teacher Dr. Benjamin Beresford—who has a Ph.D in history with a focus on Soviet and Russian history— has been informing students about the ongoing war and its developments. “I have colleagues and friends who have family in Ukraine and Russia who are directly impacted by this,” he said. “It’s something that I felt really strongly about—to make sure that people knew what was going on.”

Placing the war in a broader historical context and discussing its long-term effects is crucial to Dr. Beresford’s class discussions. In his Contemporary World History classes, Dr. Beresford began the year by covering the Cold War and the emergence of North Atlantic Treaty Organization (NATO). Students were then able to contextualize one cause of the conflict: Ukraine wants to become a part of NATO—a military and political alliance founded in 1949 in response to aggressive actions of the Soviet Union during the Cold War—and Russia is opposed to it. In his classes, Dr. Beresford also discusses the “war of information,” which refers to the Russian government’s heavy control of the Russian media and ban of the term “war” when referring to what the Russian government calls a
“special military operation.” He uses the opportunity to talk about detecting reliable sources and censorship.

In the Contemporary World History SJP class, the discussion revolves around race relations and inequalities. The class recently watched a video clip of a group of students of color who were trying to cross the Polish border but were denied entry. Sophomore Annabel Honigstein found the clip particularly compelling. “It hits harder to see things happening in front of you rather than just reading about it,” she said.

Teachers such as Firenzi feel that the emotional reaction is an essential component to discussions. “Everybody is pretty appalled,” Firenzi said. “The moral and the human implications are always a part of the conversation [in addition] to just the technicalities of what’s happening.”

Student input has also been at the forefront of both the discussion about the conflict. In U.S. Foreign Policy Honors, students like senior Andrew Schoenen have been able to reflect on the war. “After we cover some news article or hear some interview, Ms. Firenzi has been super helpful in giving us question time about logistics of the war we don’t understand, as well as providing a floor for people to give their takes about what they think will happen or how well the U.S. and other countries are handling the war,” he said.

In the SJP, many students have been spurred to action, primarily through the protest. According to Miller, students took initiative in organizing the Mar. 25 event. “Students came up with different ways that they wanted to show their support and bring attention to some of the social justice issues that are happening during the invasion of Ukraine,” he
said. “[The protest] wasn’t just about supporting Ukraine; it was also about supporting Russian middle-class workers that are out of jobs, children harmed by the invasion and the refugees of color who are having a difficult time getting out of [Ukraine].”

Along with bringing signs and shouting chants during the protest, SJP students compiled a brochure with information about the war and how others can support it. They encourage donating clothes, food and money to organizations such as Voice of Children, International Rescue Committee and Razom for Ukraine, which then deliver directly to
Ukraine. Another way to help the cause is to email California senators Diane Feinstein and Alex Padilla about how they can help support Ukraine.

Clubs are also taking action. Most recently, the Red Cross and Amnesty Clubs partnered to hold a feminine hygiene product drive for Ukraine. The clubs are accepting pad and tampon donations in bins outside rooms E-02 and H-01,  which they will send to Meest America, a U.S.-based distribution center accepting humanitarian aid packages for Ukraine. The products—which the clubs say are often overlooked when donating—will be delivered to the Ukrainian city Lviv and dispersed to relief organizations located in the country.

Support for Ukraine is not exclusive to Gunn; it reflects the response throughout the greater Palo Alto and Bay Area communities. In Palo Alto, lawn signs sporting the slogans “We stand with Ukraine” and “Support Ukraine” have populated residential home lawns. The city hall is also lit in blue and yellow every night. Community members have put Ukrainian flags in front of their homes as well as posters with QR codes to donate to Nova Ukraine, a nonprofit created in 2013 by a group of Ukrainian Bay Area residents to provide humanitarian aid and raise awareness for Ukraine. The organization regularly hosts events—fundraisers, meetings with Ukrainian celebrities and roundtable discussions about Ukraine—which have helped them raise $8 million since 2014.

Since the outbreak of the war, however, the Nova Ukraine group has focused on their Emergency Response project. They post regular updates to their website about how to help Ukrainians; most recently, they have partnered with United Nations Children’s Fund USA, delivered aid to Ukrainian refugees and organized rallies.

To contribute, consider visiting the donation resources page compiled by the SJP (https://linktr.ee/helpukrainegunn) or donating feminine hygiene products to the Red Cross and Amnesty Clubs.