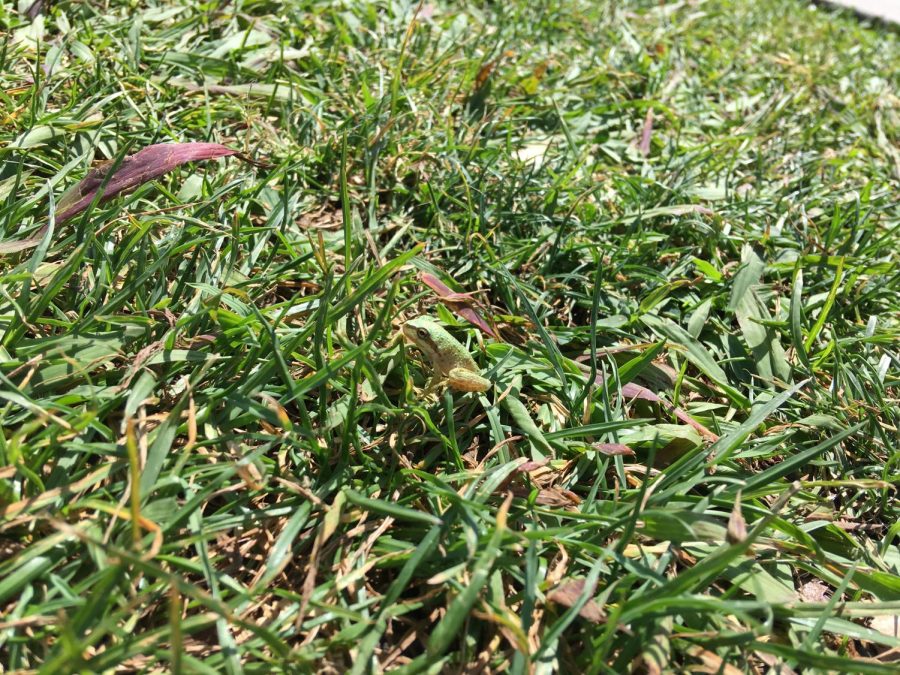 Within every school there are mysteries that are hidden and lurking in the shadows, waiting to be revealed. Gunn is no different: The campus and surrounding landscape are filled with intrigue. Rumors whispered from person to person spread stories, some true and others false. My investigation has taken me to three places around Gunn: Spangenberg Theatre, the J Building and Bol Park. I’ve searched for the pool hidden on top of the Spangenberg Theater, unveiled the truth about the mysterious sounds around the J Building and explored the hidden tunnel systems under Bol Park in search of an unknown something—or someone. The journey has not been easy in the least; it has taken time, effort, planning and research. I have had to keep my wits about me, my eyes sharp and my ears open. Yet after looking up at towering rooftops, crawling through dangerous tunnels and searching for a frog that is better at being elusive than it is at jumping, I have made crucial discoveries about Gunn. Come with me now as I reveal the truth behind the mysteries lurking in the shadows of our very own school.

There have been whispers about Spangenberg’s hidden pool from even before its reconstruction. Its dark shingles and flat architecture seem perfect to obscure a private oasis for teachers and staff. Determined to find the truth and uncover the secret pool,
I set off to investigate the comings and goings of Spangenberg. Was it merely another rumor, or a more intricate truth yet to be uncovered, kept hidden for a reason?

I stayed hidden in the shadows watching the entrances. To sleuth this out, I had to remain unnoticeable, just a shadow. I circled the building over the course of several days. Every time I looked up, searching, I saw nothing but the dark roof and the glare of the sun off the building. The truth still remained just outside my grasp. Still looking up, I walked around the building one more time and caught a glimpse of a blue glinting above the dark shingles.Was it the sky? Or was it a reflection of the water moving slowly in a forbidden pool?

Every great detective knows that some things will forever remain a mystery. Perhaps you can embark on your own adventure and unveil the mystery for yourself.

Prior to my investigation, I had only heard of the “Gunn Tunnels” as a system of pipes built under Bol Park along Barron and
Matadero Creeks.

To investigate, my journey began on the path down to Barron Creek. I walked past the bridge near the donkey pasture in Bol Park and headed down into the creek under the bridge. I heard the sound of cyclists traveling above. I was determined to get past the reeds, mud and brown water to find the mysteries the tunnels were hiding. I made my way precariously over a slightly rotten log and did my best to stay out of the water. I jumped with all my strength onto the concrete opening of the tunnel and slid under the sharp metal gate. At last, I was inside. It was cold, dark and perilous. I took a deep breath and held up my phone with the flashlight. Large walls covered with graffiti rose up on either side of me. I made my way down the tunnel into the dark. There was nothing but the sound of my own uneven breath, loud in my ears. My phone flashlight was barely strong enough to light up more than a few feet of the walls around me, but I persisted. I made my way down the central tunnel; light and civilization slowly faded behind me. I knew why I had come: I was in search of the truth behind the rumors. Someone or something was said to be alive, living beneath us. I was not sure if I truly wanted to find anything at all. Was I alone in this dark tunnel? Or was there someone watching me? I didn’t dare stick around long enough to find out.

For days I’ve staked out the J Building, waiting and listening for the infamous and mysterious croaking sounds I’ve heard rumors of throughout campus. As I sat and waited, all I could hear were the sounds of students talking, teachers lecturing and people walking from class to class. I knew that uncovering this mystery would require further research.

At night in the peaceful silence, I returned to make more progress and uncover the source of the mysterious sounds. I walked quietly on a deserted campus under the cover of darkness and flickering street lights. The J Building was at last deserted, and the
ground was barren except for an abandoned can of La Croix. I heard it then: a subtle but louder croaking noise coming out of the dark. I shone my flashlight toward the culprit but I could see nothing.

On the way home, I walked back past the reservoir at the far edge of Bol Park, where the
croaking sound was almost overpowering. At home, I researched the options, familiarizing myself with the many frog species that live in the Bay Area. After I listened to multiple frog sounds, I found the culprit. The mysterious croaking sounds appear to be nothing more than the innocent greetings of the Sierran treefrog.