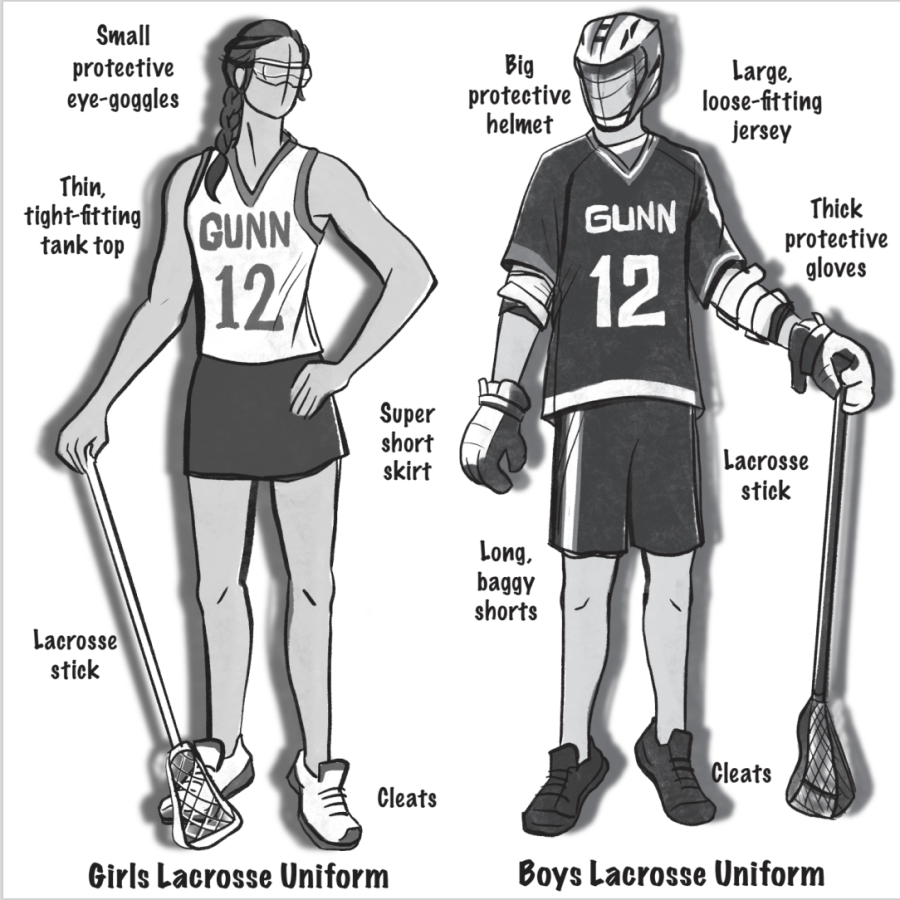 On April 6, 1896, the first modern Olympic Games commenced in Athens, Greece, reviving the long-lost Ancient Greek tradition and marking the origins of the largest and most prestigious global sporting competition to date. Not only were female athletes not allowed to compete in the games until the second Olympic games four years later, but their uniforms, often involving long skirts and puffy blouses, also defined sportswear for years to come.

When women first started competing in women’s sports, many were concerned that women would undermine the conventional “masculinity” of sports. According a “Washington Post” article titled, “The troubling paradox facing women Olympians: Sex sells. but with serious costs,” “[sport] leaders and the press highlighted female Olympians’ appearances and heterosexuality to reassure the U.S. public that women would neither overrun sport nor upend conventional gender relations.” Oftentimes, they designed uniforms for women that were feminine and aesthetically pleasing without offering any particular technical advantage.

Today, in lacrosse, male athletes are typically seen wearing a helmet, a loose-fitting jersey with padding underneath and shorts, while female athletes are seen wearing a tight shirt or a penny—a long athletic tank—on the top with either a skirt or shorts on the bottom. According to varsity lacrosse player freshman Sophia Howell, the Gunn girl’s lacrosse uniform features a penny and an uncomfortable skirt. “It’s not my favorite,” she said. “My skirt slips down quite a bit. While it’s not restrictive, it feels weird running in it.”

Since the skirts are mandatory for the team, Howell finds herself sacrificing her comfort to adhere to the dress code. “I think shorts are easier to run in, so I’d prefer wearing shorts over a skirt,” Howell said. “But because the skirt is part of our uniform, we have to wear them.”

In contrast, junior Julián Santos, who plays for the boys lacrosse team, enjoys the uniforms he wears and notes how the uniform’s padding is essential to how boys play the sport. “I think we look pretty fresh in [our uniforms],” he said. “My teammates and I are comfortable in them. The reason we have padding is due to differences in how we play the sport. Girls cannot hit each other with the stick or the ball, but in boys lacrosse, that is legal.”

While Santos notes that the differences in padding arise from technical disparities, he acknowledges that the uniforms are unnecessarily gendered. “The reason they are different is fully because of the masculine and feminine view of clothing on people in this century,” he said. “The hypersexualization of women has led to them [wearing] clothing with less fabric and more skin revealed.”

Design disparities in sports uniforms are present in other sports, including track and field, gymnastics, indoor volleyball and beach volleyball. In track and beach volleyball, professional female athletes are expected to wear athletic bikini bottoms and tops, while men wear longer and occasionally looser shorts. In gymnastics, women wear a skintight leotard that cuts off high up an athlete’s leg while mens unitards feature full-length pants or looser shorts. While some women may opt to wear shorts instead, the societal norm has evolved so that women are expected to wear less fabric without any functional benefit.

Indoor volleyball player sophomore Sophia Yen believes that the uniforms for girls volleyball are unnecessarily revealing. “We’re required to wear jerseys and spandex, which are basically very small, very tight shorts,” Yen said. “It’s one thing for [our uniforms] to be short, but it’s another thing for them to be short and tight.”

Due to their revealing nature, Yen often finds herself adjusting the length of her shorts to cover up. “I’m constantly pulling [my shorts] up or down,” she said. “It’s another thing for me to be thinking about on the court playing. I already have a lot of other things to be thinking about. I think it’s distracting.”

During the 2020 Tokyo Olympics, the Norwegian beach handball team wore shorts instead of the expected bikini bottom in an attempt to protest the oversexualization of women’s bodies in their sport, in doing so, they defied the International Handball Federation’s rules that require women to wear tight bikini bottoms with a maximum length of 10 centimeters. The team was fined 150 Euros each.

Even today, viewers often follow womens’ sports for the sexual appeal of the competitors rather than their athletic prowess. Junior Hailey Yuan, who plays both indoor and beach volleyball, often observes these trivializing sentiments in the comment sections of her favorite athletes’ highlight videos. “If you watch [professional beach volleyball players] and read the comments under the videos, they can be kind of upsetting,” she said. “Kerri Walsh Jennings has attended five Olympic games and won gold in three, but these viewers focus on her body rather than her excellence at the sport.”

Due to personal preference, Yuan does not wear a bikini when she plays beach volleyball, but she finds herself in the minority. “In Northern California, the issue isn’t as bad,” she said. “But in Southern California, you go to tournaments and pretty much everyone’s wearing a bikini.”

In fact, wearing bikinis to beach tournaments, even for younger athletes, is encouraged. “My younger sister has started wearing them,” Yuan said. “You can see how it trickles down to the younger players. They’re even starting to have tournaments here for girls beach volleyball where you can win bikinis as prizes.”

Yuan believes that being around fellow athletes who are dressed in the same way makes the uniforms less daunting. “Honestly, I don’t think about outfits when I play because I’m in an environment where everyone else looks the same,” she said. “You feel a bit safer. I wouldn’t walk around in my uniform. But in the context of a tournament, it’s not as bad.”

Yen agrees that in an athletic setting, the uniforms are normal. However, around unknown audience, the uniforms feel overly revealing. “I have two women as coaches, so they’re used to seeing girls wearing [revealing uniforms],” she said. “But I think sometimes either at school or in tournaments where there are other spectators watching who don’t play volleyball, they’re not used to our uniforms. It can make me conscious of it.”

Howell explains that the uniforms have consequences beyond sexualizing their wearers. “They create a discrepancy in how we view male and female athletes and the emphasis that we place on them,” she said. “If you see comments on social media, they’ll say, ‘male athletes are so strong and so hard working,’ whereas they’ll say that female athletes are very pretty. Creating a uniform solely to highlight a feminine aesthetic makes it so that women’s sports are taken less seriously in general.”