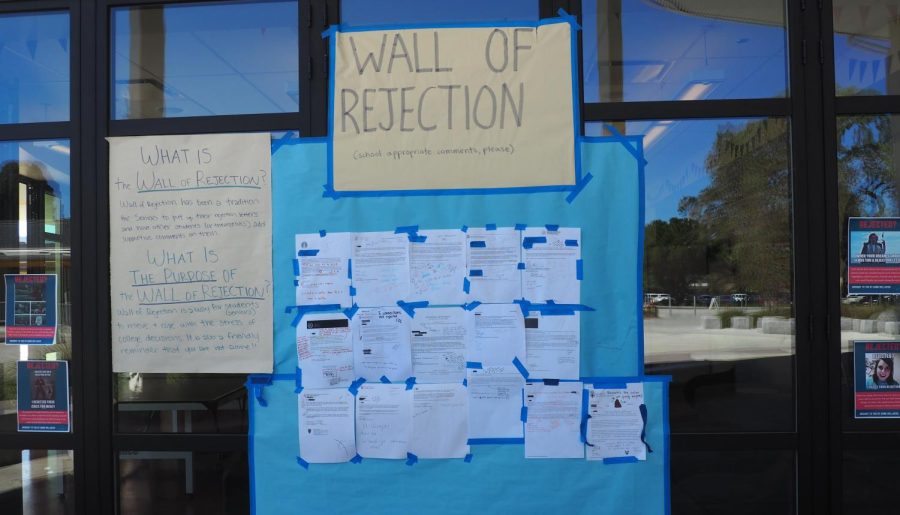 For the month of March, Gunn’s annual Wall of Rejection set up shop on the side of the P-building, providing a place for seniors to hang up and ridicule college rejection letters. The wall, set up by Gunn’s Student Executive Council (SEC), boasted rejections from universities across the country (and sometimes even outside of it), with colorful and humorous comments accompanying each “I regret to inform you.” The wall was taken down at the end of March after most colleges had finished sending out decisions.

A staple of the college admissions season at Gunn, the Wall of Rejection is intended to help seniors feel less daunted and isolated by the experience of rejection by creating a supportive space. According to senior class president Steve Cho, it’s meant to benefit both those who hang up letters and those who read them. “[From the] perspective of a person who’s hanging [a letter] up, you want to relieve the stress by sharing your inner thoughts to others,” he said. “[From the] audience’s perspective, it’s a way to know that they’re not the only one who’s going through this stuff.”

Senior Aditya Mittal affirmed Cho’s opinion after hanging his rejection letter on the wall. “It was a way of getting closure,” he said. “It’s just owning my rejection, like ‘I don’t need to sit in it and be sad about all this.’”

Indeed, the wall could be beneficial to students’ mental health, according to Wellness Outreach Director Rossana Castillo. “It’s an amazing way for people to experience that solidarity with other folks and normalize the experience of getting rejected,” she said.

However, some school administrators and staff members, such as Principal Wendy Stratton, expressed concerns about the wall this year, due in part to unfamiliarity with its informal, satirical nature. “For my part, [the main issue was] not knowing the context and the history of it and just not having been on campus last year and seen it as a tradition,” Stratton said. “Not knowing the context when I saw it, I [thought]‘Wow, what’s that?’ And part of me thought, ‘Hmm, red flag.’”

SEC Visual Media Commissioner Vincent Boling acknowledged that the wall is a deviation from SEC’s transparent, straightforward messaging. “Compared to pretty much everything else that SEC does, [the wall] is the one really satirical thing that we do,” he said. “There was definitely somewhat of a disconnect. There was concern from admin that SEC didn’t get it all, and then Ms. Stratton was really confused when we weren’t understanding her concern.”

This lack of context prompted staff members, including Stratton, to talk to SEC about the wall. “I [wanted] to check-in to make sure, ‘What do other people think? Are there different points of view?’” she said.

After conversing with Stratton, SEC members decided it would be a good idea to clarify the purpose of the wall for students and staff alike. “[Principal Stratton] is definitely right, that we need to acknowledge the fact that the tone of [the wall] is different from everything else we do,” Boling said. “I actually suggested that we put flowers all over it or pretty it up to make it more clear that this is very clearly satirical.”

SEC finally decided to put an explanatory poster next to the wall to clarify its meaning and purpose. However, according to Boling, they were reluctant to make the poster too official. “We were careful about that because you don’t want to push it too far,” he said. “By making it no longer satirical and a pure thing, people think it’s taking the soul out of it, or making it more bland. Obviously, you can’t please everybody.”

Despite the addition of the poster, some still voiced concerns regarding the wall’s overall emphasis on college. According to counselor David Leftwich, the wall amplifies the stress surrounding the college application process. “There’s this real heightened level of stress around these ideas,” he said. “It’s really fair to question whether that wall adds to that or whether that wall takes away from it.”

Though the wall may not be perfect, students like Boling find it to be a source of comfort. “My first reaction [to the wall] was not, ‘Oh, that’s terrifying,’” he said. “It was, ‘Oh, cool. There is a mutual agreement that even if we are freaking out half the time about college, we could, at the end of the day, just say that this sucks.’”

Whether this approach—wallowing in collective sorrow and trying to make light of the situation—is the “best” way to deal with rejection is up for debate, but according to Boling, the wall provides a window into discussions about students’ unhealthy perception of and aversion to failure. “The Wall of Rejection is a good starting point for this other approach to mental health and validation for students—the idea of  ‘It’s okay to fail,’” he said. “I want this conversation to keep opening up and I hope that SEC can play with this idea a little bit more in the future.”