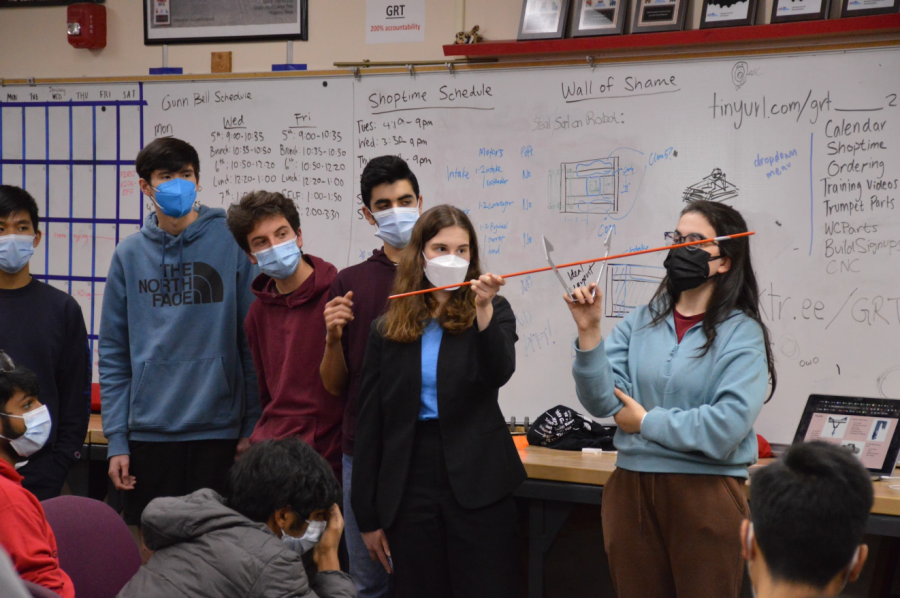 Every year, the Gunn Robotics Team (GRT)  participates in the For Inspiration and Recognition in Science and Technology (FIRST) competition in April. The GRT season ended in April, but the team is still continuing with postseason activities. Along with in-class assignments and presentations, the team is working on projects and preparing for the next season.

After the FIRST competition, team members complete two tasks: creating a resume about what they have learned during the year and making a technical presentation about each part of the robot.

Team advisor Kristina Granlund-Moyer believes that passing down information is vital for the team’s development. “We lose information every year when half of our team graduates,” she said. “When the team was shut down for a year and a half, we weren’t able to do this, and that made things really difficult. This year, we had to learn everything all over again and it was hard.”

Therefore, Granlund-Moyer considers the technical presentation to be a valuable experience for the team each year. “It gives students the opportunity to practice their technical presentation skills,” she said. “[It] also gives the presenters a chance to pass down what they have learned about the robot, especially graduating seniors.”

Sophomore and GRT member Casey Feng acknowledged the importance of learning from the past. “Everything that we do in GRT is so that we can learn [from past mistakes] and work on what [needs to be done so that] we can do better next time,” she said. “We’re gaining knowledge and preparing for next semester.”

Apart from the assignments, senior and GRT captain Akshay Patil said that the team is working to complete two projects that the team started during quarantine. “Two elementary school students with disabilities reached out to us,” he said. “One of them has limited function in his arm so he can’t play the trumpet. We’re building him something that can allow him to push down the buttons. Another project is for a student who uses a wheelchair who wants to be able to play soccer with his brother. We are making a soccer shooting machine for him.”

Additionally, the team plans to participate in multiple outreach programs and activities. Granlund-Moyer spoke of annual events that GRT participates in. “We usually take our robot to the May Fete parade,” she said. “Nixon Elementary school offers a Science Night and they invite us to bring our robot there. We also show off our robot at Science Day at Great America and sometimes [at] town picnics.”

Another key part of GRT’s postseason is choosing next year’s leaders.. “Really, what we’re doing is getting ready for next year,” Granlund-Moyer said. “We hold elections for next year’s team leaders. All of the members staying on the team get assigned new jobs for next year and then they try to extract as much information as they can from the outgoing seniors before they graduate.”

Beyond organizing the team and figuring out improvements for next year’s competition, the team also aims to recruit more members to join GRT. Patil hopes to spread more awareness about GRT through an upcoming school showcase next Friday during lunch. “People have heard about GRT and they know their friends on the team, but they don’t exactly know what we build,” he said. “We just want to give them a demo. We also want to get freshmen and sophomores interested in robotics, so hopefully they’ll apply next year.”

The team will be showing off their robot in a showcase at the senior quad on May 13 during lunch.