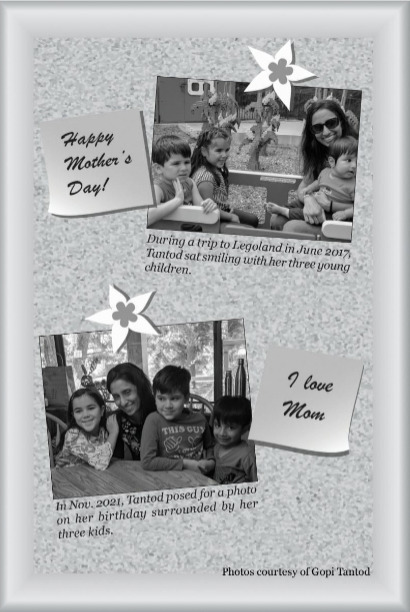 She’s a teacher by day and a mom by night. Like many superheroes, math teacher Gopi Tantod lives a double life. She spends her day expounding on the mysteries of complex mathematics and stays up late into the night working on lesson plans and grading quizzes. Her afternoons, on the other hand, are full of soccer practices and baseball games, scraped knees and fantastical stories. As a mother of three (a 5-year-old and 8-year-old twins), Tantod has adapted her life to maintain a balance between her obligations as a teacher and her duties as a mother.

One of these adaptations includes working part-time at Gunn. “Most of my kid responsibilities are in the middle of the day,” she said. “I do all of my grading and prepping at night after they go to bed.”

The demanding nature of Tantod’s obligations force her to be more time efficient. “I’ve always grown up with the philosophy that if you need time, you make time,” she said. “It’s being efficient with your time [that is key]. Most people say you have to pick one [obligation] or the other, but I feel like you could find a good balance and try to work with both of them.”

For Tantod, this philosophy sometimes means multitasking. “If I’m at [my] kid’s sporting event, I can grade during that time,” she said. “[It’s just about] using my time however I can.”

Tantod is careful to create some separation between her work and her family, especially when it comes to her children’s paths in mathematics. “I kind of let them figure it out for themselves because I don’t want to be the influence of how math goes for them,” she said. “I want them to see where their path takes them; I don’t want them to feel pressured to be really great in math.”

This mindset of letting kids think through things also translates into Tantod’s attitude in the classroom, where she encourages students to problem solve. “Sometimes I might be harder in my questions just because I know that if I give that push, they’ll understand it better,” she said.

Of course, being both a teacher and a mother isn’t all grueling and hard work—there are rewarding moments in both parts of Tantod’s life. On Mother’s Day, Tantod anticipated some acknowledgment of her maternal efforts, though it might be more exciting for her children than for herself. “I feel Mother’s Day is more for my kids than for me,” she said. “They get excited to get flowers [and] cook with Daddy. They [also] get excited to say ‘we’re going to take you on a hike’ or ‘we’re going to take pictures.’’’

Tantod recalls last year’s Mother’s Day, which involved a menu curated by her daughter and meals cooked by her husband.“Last year, they made ravioli from scratch,” she said. “My daughter actually made my husband [make] a menu for the day. She had breakfast, lunch and dinner all created—and they were her own creations. [My husband] had to cook whatever she put on the list.”

Tantod also encourages students at Gunn to reach out to their mothers. “I think moms, especially of high school kids, feel [that] their [children] going to leave soon and a lot of kids shut them out at that time,” she said. “Spend time [with your mom]. They appreciate it.”