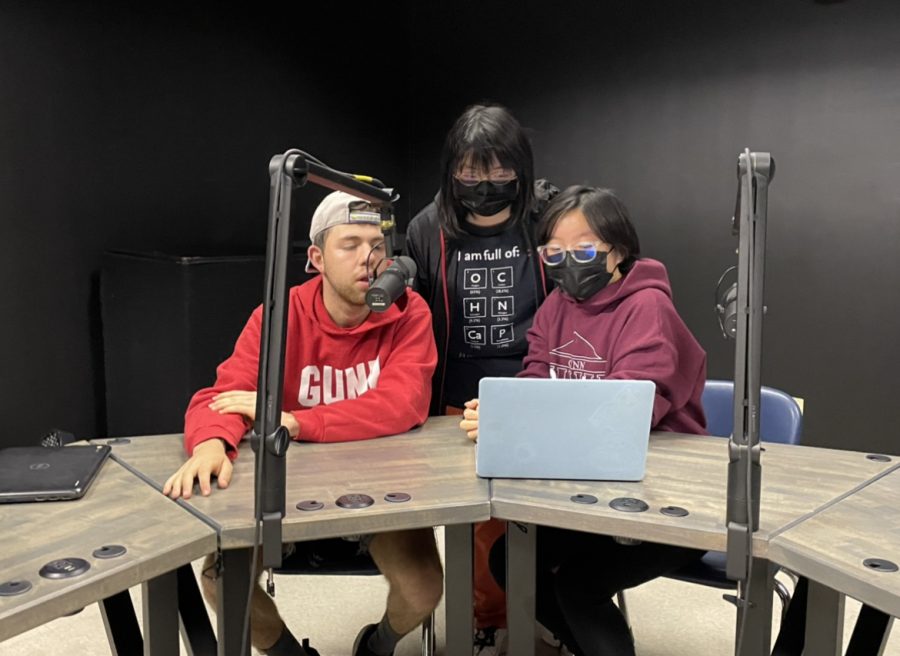 This year, Titan Broadcast Network (TBN) shifted to producing weekly on-demand podcasts from its daily live programs of past years. The podcasts are posted on Schoology, Spotify and the Gunn website every Wednesday. This change was made following a smaller class and related challenges, and has been a way for the staff to explore an alternative form of distributing school announcements and news.

TBN now produces one to three minute long podcasts, as well as occasional documentary-style features about Gunn students. According to TBN advisor Ed Corpuz, the content of the podcasts—spanning school, sports and world news—has not changed from the daily announcements produced in past years, though new episodes now come out every Wednesday instead of every day.

The change to producing podcasts was prompted in part by low enrollment this year in Broadcast Journalism, the class that produces multimedia news for TBN. Corpuz explained that with fewer than 10 students enrolled, the administration combined the class with Honors and Advanced Video Production. “We just didn’t have enough students to have a full, dedicated period section for Broadcast Journalism,” he said.

The combined class has stunted TBN’s ability to produce daily live shows this year as a result, according to TBN staff member and 2022-2023 Executive Producer junior Megan Murakami. “Mr. Corpuz [the advisor] has to manage both classes at the same time, so it’s really hard [for him to give full attention to each class],” she said. “Our class can’t do as much as we would like to.”

TBN staff member sophomore Kyle Luo agreed, citing the preparation time and staff size it takes to produce daily broadcasts. “Now, we just don’t have the time to do it or the resources necessary,” he said.

Another consideration for the change was increasing accessibility for teachers and students. “Having [podcasts] on demand gives teachers more flexibility to play the announcements for their students that fits along with their lesson for the day,” Corpuz said.

TBN has reframed these challenges as an opportunity to try a different approach to distributing multimedia news. They have piloted new technologies such as Descript, an audio and video editing software. They are currently one of few—if any—high school broadcast classes using the application, according to Corpuz. “I’ve seen this year as a year for us to take advantage of [the smaller class size], to try new things and to see what platforms and formats students are actually using to get news,” he said.

Luo explained that the staff made the decision to switch to on-demand podcasts at the start of the school year, and it has been an ongoing conversation. “We wanted a hybrid—we didn’t want video only [because] it would take effort [in terms of personnel] that we didn’t have at the moment,” he said.

According to Corpuz, TBN has been producing content outside of daily broadcasts for over 10 years, mostly of features and long-form investigations. Given trends in online content consumption, it made sense to pivot to on-demand news podcasts, similar to those of large news companies like CNN. “They also have many small [news] episodes, and we modeled our Titan Newsbrief after what news organizations are doing,” he said.

The small staff has been extremely productive and motivated, taking on different roles as necessary, according to Corpuz. “I think this group is an example [that] it’s not so much about how big the program is, it’s about how passionate the students are and how they support each other,” he said.

2020-2021 Executive Producer senior Ingrid Lee said the podcasts show growth and potential for TBN. “TBN’s podcast game has stepped up a lot,” she said. “It has improved a lot from when we did tests and trial runs during my sophomore year. When we were doing podcasts, we were so new to the editing and the content we were pushing out. I’m really happy to see that these podcasts are pretty successful.”

In French teacher Laura Lizundia’s experience, the live broadcasts of past years were more engaging than her current method of reading the Daily Bulletin to her first period class. “Students listen to students,” she said. “They enjoy hearing broadcasts [more], even though it’s the same words, when it comes from the students.”

Lizundia further noted that this higher level of engagement is imperative to getting information out to students. “For the kids who find it valuable, they listen [to the broadcast],” she said. “There are always going to be people who don’t, but it’s one more way to make what’s going on on campus public.”

TBN will have a small staff again next year, according to Corpuz. Still, students will continue to work towards telling the stories that need to be told. Looking forward, TBN plans to resume live broadcasts and circulate content more often next year, establishing a three-week cycle where three-student teams turn in work at the end of the cycle. Murakami emphasized the importance of providing consistent coverage. “We’re definitely trying to speed up our process of producing these stories,” she said. “The more we produce, the more we could possibly touch people’s lives.”