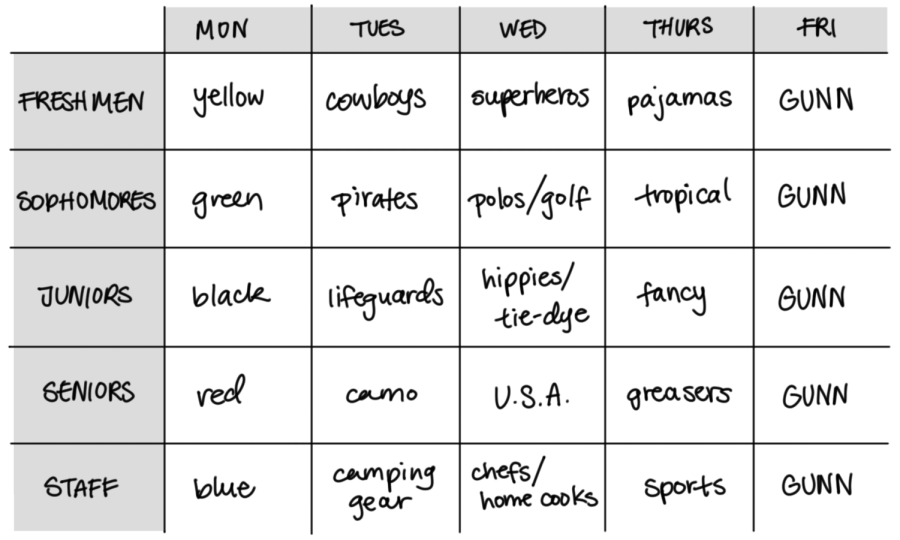 Homecoming is only a few weeks away, and many students are starting to prepare for the most spirited week of the year. It is important for all those who wish to participate to understand how both how the week works and what exactly they should prepare for.
How to Participate in Homecoming
Out of the new and recurring components of Homecoming Week, the easiest and most popular activity students prepare for is the dress up days. For each day of the week, each grade and the staff has a different dress up theme related to the overall theme of the week, which this year is “Gunn Inc.” See the chart on this page for details on what to wear on each day of the week.

Spirit Commissioner senior Nico Ross acknowledged that not everybody can dress up for every day and emphasized the importance of wearing what you have. “It doesn’t have to be a costume, it’s just something that you put together out of different garments to make it match the theme,” he said.

Sports Commissioner senior Pooja Bucklin recommends sharing old clothes to avoid excess spending on new ones. “Ask older siblings and friends for their old materials, look around your house and be creative,” she said. One of the many ways to participate and help foster a sense of spirit within classes is by signing up for airbands and floats. Airbands is a group activity where each grade choreographs and organizes a dance, which is then performed and judged during Night Rally on the Thursday of Homecoming Week.

Each class also builds a float to act as an art installation around the campus during Homecoming Week—although the constructions were wheeled as actual floats on the Hal Daner track in the past, they now stand throughout the entire week at various locations on campus. Senior Lucy Ma, who has participated in both airbands and floats in previous years, emphasizes the importance of signing up for these activities even when they may seem intimidating. “My advice would be to get involved and participate,” she said. “There’s a lot of stigma around showing that you’re passionate for something, but it’s important to push past that in order to enjoy homecoming.”

To learn more about participating in either airbands or floats, both of which require no previous experience, reach out to class officers or any member of Student Executive Council (SEC) and check your class’ updates on Schoology.

Brunch and lunch games are also an important part of Homecoming Week. Brunch games are held on the quad and are brief but action packed. One example from past years is Stuff-a-Square, an event where grades attempt to pack as many students as they can into a designated area. Lunch games, such as the obstacle course and tug-of-war, are longer and often feature many participants from each grade. In the past, there have been issues with students following the rules in games such as the tug-of-war, so Special Events Commissioner senior Jack Poon advises all students to pay close attention to and comply with the rules, especially in hectic games such as tug-of-war. “Listen very carefully to what people say during tug-of-war because if you start early, your entire class gets disqualified and nobody likes that,” Poon said.

All of these activities are worth more than just class pride—airbands, floats and games are all worth homecoming points, which determine how the classes are ranked at the end of the week. Sportsmanship and cleanup points are also factored into each day’s tally. Points are updated daily on a physical poster on campus as well as on the Gunn SEC website. At the end of the week, homecoming points are tallied and the results are publicized on Schoology and social media.
Homecoming Events
Night Rally is the first major afterschool event during Homecoming Week, taking place on Thursday and featuring airbands performances for a crowd of both students and community members. Ross, who is the Master of Ceremonies for Night Rally, encourages students to get spirited for not only their own class but others. “Get decked out in your class colors and be loud,” he said. “It’s a class competition, but during Night Rally we’re all celebrating everyone’s work they put in for airbands—definitely cheer for your buddy classes.” On Friday night, the homecoming football game takes place on the home field. The classes’ float rankings are announced at halftime, and the Homecoming Court—a group of 10 seniors chosen by the rest of the student body—is showcased as well. The Homecoming Dance occurs the day after, on the Saturday of Homecoming Week, and this year it will take place in the Titan Gym.

Though it is exciting to win and disappointing to lose in homecoming, Student Activities Director Lisa Hall emphasizes the week’s spirit of coming together. “If your contestants did everything they could, it’s just a game in the end,” she said. “Ultimately we just want everyone to have a good time.”