In light of the recent school shooting at Sandy Hook Elementary in Newtown, Connecticut, The Oracle staff felt the need to evaluate how prepared Gunn is for an armed intruder on campus. The Oracle decided to examine the Code Red and lockdown procedures and safety protocols practiced at Gunn. 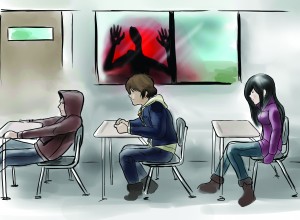 The 2012-13 Student Handbook, which all students are required to read before each school year, defines a Code Red situation as an instance of an “armed intruder on campus.” In the event of a Code Red, students and staff are required to go to a classroom or the lower football field, reinforce the door, build an internal barricade and cover the windows and turn off or dim the lights. The school would remain in lockdown until authorities and officials deem the situation safe and under control.

According to Dean of Students James Lubbe, who coordinates all the school emergency procedures, Gunn has had two code-red situations in recent years. In early 2009 there was a gang-related shooting near the apartment complex by Terman Middle School, which resulted in approximately two hours of lockdown at Gunn. In late May 2010, a sighting of supposedly armed students in the parking lot triggered the Code Red, and Gunn was in lockdown for nearly an hour. Beyond recent years, in late February 2006 a mental patient, rumored to be armed, escaped from the Veterans Affairs Palo Alto Health Care System, more commonly known as the VA Hospital, and Gunn was in lockdown for about an hour after school.

In order to prepare for possible lockdowns each school year, all staff members undergo formal training regarding emergency and Code Red procedures. Lubbe coordinates an emergency and Code Red review with the Gunn staff before the beginning of each school year, to ensure that all teachers are prepared by the first day of school for a potentially dangerous situation. Moreover, teachers who are newly hired are instructed on Code Red protocol during their initial orientation in addition to the full-staff review, before their first school day of school at Gunn.

According to science teacher Casey O’Connell, the reviews and initial orientation are effective and clear. “[All new teachers] that [attend] the preparation [are] as ready as they can be by the time the [school year] starts,” O’Connell said. Megan Stauffer, a math teacher who was hired as a teacher for the first time this school year, agrees that the “emergency procedures are clear for new teachers,” and feels that she knows what to do in the event of an armed intruder on campus, and is as adequately prepared as any other teacher.

On top of staff preparation, Lubbe organizes the Code Red drill once a year to practice the lockdown procedure with students and to elicit feedback from teachers. During the annual drill, Lubbe and other administrators survey the campus and check to make sure doors are locked and classes are quiet. Lubbe and other administrators also share feedback with teachers after assessing the effectiveness of their practices. According to Lubbe, the feedback contributes to the minor tweaks in safety protocol made every year.

In terms of overall logistical preparation, Lubbe feels that the Gunn community knows the procedures well and as a school, Gunn knows what to do, although it’s difficult to speak for every exception. “In a crisis situation, there are times the unexpected occurs, so I think it’s just how you react at that time,” he said. Lubbe also acknowledges that no community can emotionally prepare for any kind of event that would invoke a real Code Red.

Lubbe noted that during the airsoft-gun scare in 2010, while teachers’ responses were near-perfect, getting information out to the community needed work. According to Lubbe, parents who were trying to pick up their children were knocking on the main office door out of confusion. “We have to figure out how to communicate with parents and have a better solution for people entering campus during a Code Red situation, such as having [the Palo Alto Police Department (PAPD)] block the driveway,” he said. “[We] don’t want to have people to come up on campus if [we] have a situation where it’s dangerous.”

Although the campus is considerably open both space-wise and student-conduct wise, Lubbe, Principal Katya Villalobos, and Palo Alto High School (Paly) Principal Phil Winston, who was an Assistant Principal at Gunn until June 2010, agree that because the school is part of the community, the school’s transparency and openness is appropriate. “It’s a different set of circumstances than 350 students in one building,” Villalobos said. “[We are] at a school with 2000 people coming and going on a daily basis so we’re dealing with something like a little city.”

According to Lubbe, the open campus contributes to the open and local community, which makes it difficult to close the school with security-fences and gates. “Here it’s an open campus, and we have many buildings but nothing is enclosed; every building is accessible,” he siad. “We don’t have fences because we don’t see the need — this is not the type of community where [a shooting] is as probable.”

Lubbe, Villalobos and Winston all feel that the most important security measure Gunn takes is in its intuitive approach to handling people on campus and knowing the conduct of the campus. “A lot of our safety is part of our culture,” Villalobos said. “If we or a teacher or a campus supervisor sees someone that looks slightly suspicious or just doesn’t belong, we will act.”

Villalobos also mentions that a built-in security feature of the school is that nearly everyone that enters or exits the campus passes by the administration office building first, and they monitor guests with a sign-in process.

Similarly, Lubbe feels that it is especially important that the administration is aware of who is on the Gunn campus at all times. “If we don’t recognize someone, unless someone is wearing that visitor name badge, then I think we need to make sure we have that question, ‘What are you doing here, and why are you up here?’,” Lubbe said.

While Gunn’s safety procedures and security measures are considered proficient and effective, Winston thinks one thing both Gunn and Paly should look into is implementing a safer locking mechanism for doors. All building doors open outward for both campuses, which renders barricades less effective than if the building doors opened inward.

In addition, to lock a door in the case of a school lockdown, teachers need to open the door, exit the room and set the lock from the outside while the door is open.

According to general police department guidelines, this process is considered dangerous, because it temporarily exposes a teacher or door-locker to an assailant and it reveals there are people in a room, which gives an armed attacker more opportunities than the school can afford.

In response to the shooting at Sandy Hook, Lubbe and Assistant Principal of Facilities Kim Cowell are discussing implementing Columbine locks for the buildings undergoing construction. These particular locks, which are named after the shooting at Columbine High School in 1999, are designed to lock the door when it’s pulled towards the inside of a room, rather than requiring a teacher to lock the door from the outside.

According to Lubbe, there is talk about having emergency meetings at both the district and school levels, where district officials and Gunn admin will discuss procedures and how to improve the safety of the campus. “We’re looking into improvements we can make,” Lubbe said.