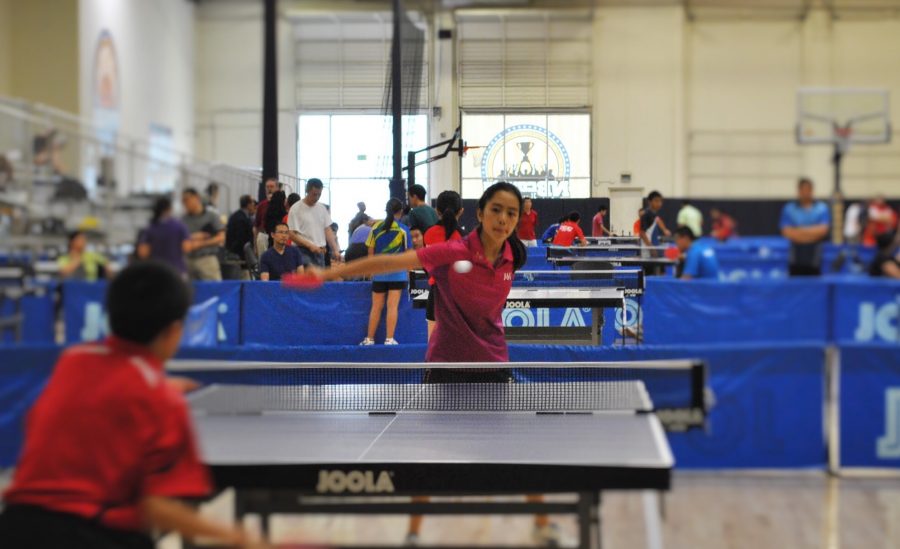 Mo competes in a match. Courtesy of Mo

Sophomore Emily Mo has been a competitive table tennis player for four years. She competed in the finals at the 2014 U.S. Open and trained in China this summer.

The Oracle: When/How did you start playing table tennis?
Emily Mo: I started playing since I was in the sixth grade. Both of my parents were part of China’s table tennis team. My dad suggested that I should play a sport to stay fit and it turned out I really liked it, so I continued playing until today.

TO: What is your favorite part about playing table tennis?
EM: I like how the game depends solely on the player. During a game, I’m the one who controls the game. It’s hard to mess up because I can just play the way I want to. As long as the ball returns back on the table, that’s all it matters.

TO: How are normal ping-pong tournaments structured?
EM: Tournaments consist of different events that the players can sign up for. Events, such as single, doubles and mixed doubles (co-ed) are split based on gender and age groups. I play mostly singles and girls’ doubles. You play multiple games during a tournament where you eventually win your way to the finals. If you lose a game, you are eliminated.

TO: What are some of your most memorable moments?
EM: My most memorable moment was when I played in the finals at U.S. Open. Unlike regular table-tennis tournaments, the finals at U.S Open has a bigger audience and the referees judge much more seriously. I definitely was very nervous, but I was also very excited because I had never played at such a big tournament before.

TO: What are some challenges you have faced playing table tennis?
EM: I used to get extremely nervous before a game, but as I practiced harder and longer, I eventually got over my anxiety before each game. I try to focus only on the game and forget about everything that is happening around me and not worry about the results.

TO: What motivates you to do well? Is there anyone who you look up to in table tennis?
EM: My goal is to get on the junior national table tennis team, and this goal keeps me motivated. I really want to travel to other countries to train and play games. Table tennis is my favorite form of exercise. I really enjoy the sport, and there’s no reason for me to quit. Also, there’s this girl on the junior nationals team named Angela Guan, and her way of carrying a game is similar to mine. She plays extremely well, and someday I really want to play as well as she does.

TO: How do you prepare for a game?
EM: During training, we do a lot of physical such as running and jump roping. Mostly we focus on footwork and endurance. Footwork allows us to move faster, and endurance helps us to play more games. When I’m in training, I practice continuously with my coach and try to focus on the game. It doesn’t matter to me if I win or lose; I just play my best. I’m not saying I don’t care about winning—I just don’t think about it too much.

TO: What was your experience like training in China?
EM: I trained in China over the summer for three weeks. It was extremely hard, especially [because] I had to train four hours a day: two hours in the morning, two hours at night, plus physical training in between. Plus, my parents weren’t with me. At first, I couldn’t get used to it, but afterwards I learned a lot about independence and adjustments.

TO: What have you learned from playing table tennis?
EM: I learned a lot about patience. Before, I used to get angry and impatient whenever I lost a game. Slowly, I developed a way to figure out how to control my anger, and now I just don’t get mad anymore.

TO: What is your biggest accomplishment?
EM: My biggest accomplishment so far was winning second place at U.S. Open. It was the first time I ever competed in such a competitive tournament. I played a total of six games until I branched off to the finals. Although I didn’t win, it was overall a great experience.

TO: What is your advice to anyone who wants to get into table tennis?
EM: Since I started playing when I was pretty old, everyone else started since they were like six, but I really liked it, so I kept on working hard and now I am at a point where I can compete with people who started training since they were kids. So, as long as you work hard and learn [the techniques] then you can also succeed.

TO: What are your future plans?
EM: I definitely want to continue to play on a college team, but right now, my goal is to just work hard and try to get on the Junior Nationals team.