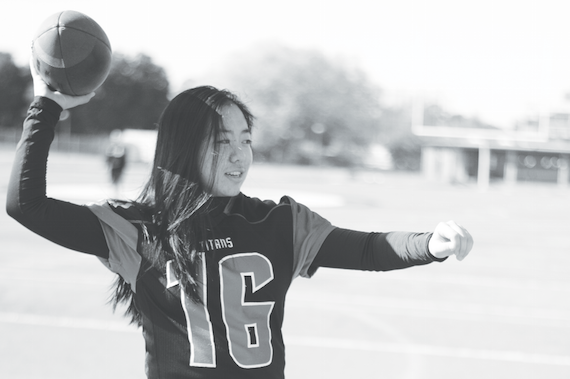 Senior Sara Zhang is the only girl on Gunn’s varsity football team. Up until her injury regarding her foot ligaments, she was the starting kicker and punter.

Zhang decided to do football this year because she believed it was a once in a lifetime chance. “I’m a senior this year and one of my goals this year is to take on new opportunities and challenges,” Zhang said. “I probably won’t be playing college football or joining the National Football League anytime soon and I knew this would be one of the last chances I would get to play football.” Many of Zhang’s friends inspired her to try out, and her experience from soccer made her feel athletic enough to participate.

After showing herself as a serious player to the coach and her team, Zhang still had to prove to herself that she could do it. “Being on the football team has forced me to push my limits both mentally and physically,” Zhang said. “It wasn’t an immediate change but my self-esteem and confidence gradually grew and after summer practice and a few weeks into school, I felt like a changed person.” As the only girl on the team, Zhang felt like there were some instances when she doubted her abilities. “In general I felt inferior and unfeminine when I worked hard,” Zhang said.

Football has helped her realize that the stereotypes that society imposed on her didn’t matter. “I learned that from being the only girl, there is a pressure and a certain social stigma in which I have to be more assertive, more serious and more focused than all the other boys to gain a fraction of the respect that they are handed on day one for showing up,” Zhang said.

Since Zhang began her football career for the year, many classmates, peers and teachers have shown her tremendous support. Although there have been some negative remarks about her abilities from a few teammates, the feedback Zhang has received has been mostly positive. “No matter what others have to say about my kicking, I know that I show up every day with a good attitude and I work hard,” she said.

Gunn’s varsity football coach Coach Hirano thought that Zhang coming to try out was a positive step. “She laid out what she wanted to do, and I thought it was a great plan,” Hirano said. “She came out all summer like she said she would—she lifted, worked out with us, and for her it paid off and I think the dedication was there.” According to Hirano, Zhang brings a different kind of leadership to the team that the team has really embraced.

Hirano thinks that if more girls play, then there can be a serious conversation about girls playing football. “I think it needs to start that girls need to come out and play first and if that starts to happen, it might be a different conversation five, 10, 15 years from now,” Hirano said.

Hirano does not intend to try to recruit a specific gender, but said it has always been an open door. “As long as they do what’s expected like everybody else, I think it’s fine,” he said. “My biggest thing is that I hope people don’t give girls a bad time for being on a football team–I just hope that the student body embraces it.”

Hirano encourages girls to come out and play football. “There’s a lot of girls that could do the same thing guys do, and it’s just a matter of doing it,” Hirano said.

Senior varsity teammate Jonathan Abraham pointed out that Zhang inspired other girls at Gunn to play. Abraham noticed that Zhang brings several things to the team. “She is a good role model to some of the underclassmen—she is very committed to the team and comes to every practice on time with a positive attitude,” Abraham said.

Senior varsity teammate Michael Werer also believes Zhang brings a lot of passion, commitment and encouragement to the team. He notes there is a change in the atmosphere but not because she is a girl. “The change comes from her attitude and feelings about the team,” Werer said. “She is very passionate about the team’s success and is always encouraging us when things are going bad or good–it has made the atmosphere more positive. She brings a unique level of commitment and encouragement to the team that I think would be hard to find someplace else.”

Zhang encourages other girls and boys to do what makes them happy. “If you have an inkling that you want to try out for football or wrestling or whatever the sport may be, go for it,” she said. “The only person who truly dictates your life is you, and if you really want something you will find a way to achieve it.”