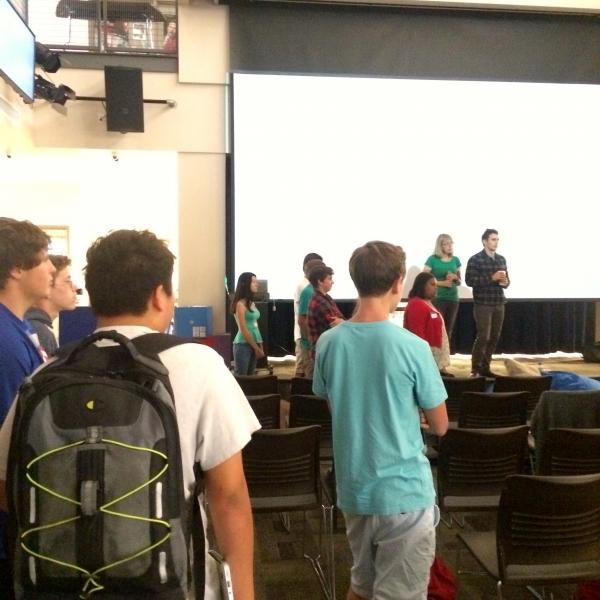 Junior Juan Santos is one of the 40 students taking Franco’s class. When he heard about the class, Santos immediately jumped at the opportunity to apply as he wanted to take his love for filmmaking to the next level. “Hearing that James Franco—a really accomplished writer, director and actor—is doing something that is involving my passion was a massive opportunity for me and I just had to take it,” he said.

Santos is especially excited about the prospect of creating a full movie. “The fact that we’re making something big [is something] I’ve always wanted to do,” he said. “[The film is] about a bunch of high schoolers and their experiences and the problems that they’ve had to deal with.”

Sophomore Flora Hon, another participant, started filmmaking as a hobby in eighth grade but hopes to expand her interest and gain more professional skills from the class. “I always liked film and took for the whole year in freshman year,” she said. “Now I’m on the Titan Broadcast Network (TBN). I can bring back what I learned to Gunn for TBN and improve my own videos.”

Although Hon has had experience with filmmaking, she has never created a piece as long as “Metamorphosis: Junior Year.” “We’ve only made short videos like music videos and short documentaries in other film classes,” she said.

Hon explains that working with a celebrity is different than she expected. “He keeps it really professional and so do we,” she said. “I feel like we treat him like a normal teacher instead of what people might think us to be fangirling and snapping a bunch of photos.”

As opposed to both Santos and Hon, senior Eva Stoneburner is more used to being in front of the camera, not behind it. As an actress, Stoneburner has not had much experience with actual filmmaking. “I’ve never made any films before, but I’d definitely love to learn how to,” she said. “I thought it would be a really incredible experience [to] get myself out there and do something I love and try out something that I’ve only dreamt of doing.”

Through the workshop, Stoneburner hopes to learn more about what filmmaking is like. “I’m looking forward to making connections and learning about the industry,” she said. “I’ve gotten to give a lot of input into the whole process of making this movie. I’m really excited that I’m getting my ideas out there and people are listening to me.”

Santos says that the best part of the class is Franco’s collaborative approach to teaching. “I really appreciate that it’s not just him commanding everything that we do,” Santos said. “We work with him to understand the things we want to change and the ideas we hope to convey, he’s allowing us to take the reins.”

Franco’s work ethic, determination and diversity inspires Santos’s goals as an artist and filmmaker, Santos says. “Although not all of his projects are successful and great, he still pushes forward and still wants to do more and learn from his experiences,” he said. “He’s a very well-rounded artist and that’s the main thing I look up to.”