Pursuing freedom: senior Miranda Smith on coming out to the world and herself 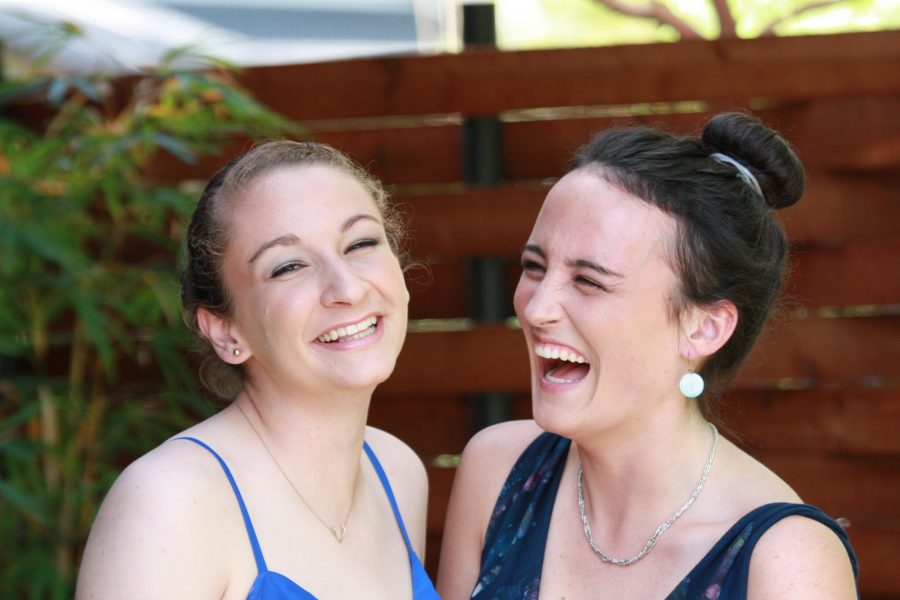 Us going to prom—for the record! Photo courtesy of Miranda Smith.

When I was 16, I fell in love with another counselor at an all-girls summer camp in Maine. No, I’m not pitching you a twenty-first century coming-of-age rom-com (but look for it in a theater near you, summer 2040), but this is how my entire world flipped upside down over a period of two months. Until that summer, I didn’t think I was gay. I didn’t think I could be gay. I thought that a little fairy with an asymmetrical haircut would have tapped me on the shoulder during my childhood and whispered in my ear “you gay,” but I felt no signs. (Looking back on the amount of suits I wore throughout my adolescence, I should’ve known.)

I went through so many stages of denial and self-hate for the feelings I was beginning to have for this hip older counselor. It wasn’t until after camp that we confessed our feelings and began a relationship. Turns out, she was feeling the exact same way (I’m serious, this will be a movie). I assumed my parents would be okay with it right away, and discovering that it was going to take time crushed me. Because I was so scared about what was happening, I immediately decided to keep my newfound identity a secret from school. I was living two lives: someone falling in love for the first time and a normal high school student who just so happened to be texting this one friend all the time. Being a straight student at Gunn became a character I was playing: I told endless lies and let myself down each and every day I couldn’t tackle my next target on my list of people I needed to tell. Meanwhile, Advanced Placement Biology was kicking my butt.

Though I rarely received a sour reaction, coming out to someone felt like being punched in the stomach, having my heartbeat on triple time, all while having the flu. Although I powered through the stomach punch and told a handful of people, my entire relationship was a secret for a year. I became paranoid, anxious and closed off. I couldn’t keep up with my two lives so I shut myself out of both of them. I wasn’t myself, as a friend or girlfriend. I began to become obsessed with keeping it a secret and focused so much of my energy into hiding that I felt like there was nowhere else to turn. I wouldn’t let my girlfriend hold my hand in public, dutifully wiped my social media presence clean of her and orchestrated countless fake conversations. I felt a coat of sickness everywhere I went and could hardly eat for a couple months. I developed a great sense of anxiety and sadness that hit me from the moment I woke and kept me up half the night. I was frantically waiting to reach the “better” part of the “it gets better” slogan (spoiler alert: it did and it does).

I needed time to sort myself out and become comfortable with being open. I thought the best way to do this would be to put myself into isolation, when I really should’ve reached out. After several flashes of panic, I decided I was ready to take my girlfriend to prom (though you wouldn’t know it because yes, girlfriend of the year destroyed the evidence). Once we began dancing that night I started to feel the freedom of letting go of my hyper-awareness of what other people thought. In reality, the amount people cared and the lengths I was going to were greatly disproportionate. The next August, I built up the confidence to post on Instagram for our one-year anniversary. Boom. It was out. I anticipated everybody I knew would stop thinking of me the same way and I would set the rumor mill on fire, but my delusions failed me: posting publically had the greatest effect on me rather than anyone else.

Once it was public knowledge, giant cement blocks were lifted from my shoulders. It was so much easier to open it up to everyone as opposed to the long, slow, tear of the Band-Aid I was doing before. I began to talk about it more, and that felt so good. I started to hone a part of myself that was once a rat I had tried to shoo out with a broom. As I began to open up, the greatest gift was that I started to feel powerful. The more I talked about it or showed it, the more powerful I felt and the more I loved myself. What once was my greatest weakness became my superpower (another movie?) and for the first time in a year, the acceptance I had been longing for finally came to me, from myself.

Things weren’t all rainbows (so to speak…) the second I came out. It’s important to note that even in one of the most progressive places in the nation/world, being gay isn’t no big deal. I’ve walked past a restaurant before with my girlfriend and watched the store owners see us and flip their sign to “closed,” witnessed a young girl smiling at us holding hands and seen her dad whisper something to her and her face turn to a frown, watched a mother actually carry her kid out of a store we were in as if she was going to catch some disease and I’ve had to hear discriminating comments from longtime friends.

I go through micro-coming-outs every single day. In ordinary conversations I have to decide to replace “friend” with “girlfriend,” even though it’s still nerve-wracking. As discouraging as these experiences are, I have to remind myself that these consequences are petty to what many have had to suffer in the past and what many go through in other parts of the country and world. I also see it as an honor to be open, because I know that if I had seen more people like me roaming around Palo Alto, I wouldn’t have been as scared.

You might be saying to yourself, but Miranda, I changed my Facebook profile picture to have a rainbow filter last summer; what else could I possibly do? First off, talk, talk and talk about these things. I feel like we’re in a new wave of acceptance where we’re too nervous we’ll say the wrong thing that we don’t say anything at all. Although I feel so much more love and support now, I seldom get asked about my relationship or what it’s like to be gay. And it’s a bummer because I’ve been keeping it all in for a year, I’ve got a lot to say! Start conversations. With me, with your family, with each other. Keeping thoughts and questions hidden will never promote understanding. Just starting a conversation shows that you care, and the impact of that can go far. Also, stop posting pictures in which you joke that you and your other straight friend are lovers, wives, gay. Though this act seems harmless, these captions use being gay as a lazy joke to exaggerate their love for someone of the same sex, when it’s the real and oppressed identities of others. I can’t believe how well-pronounced this trend is; there are so many other ways to express love without using somebody else’s identity as a costume. Have an awareness, read articles (you’re here right now, go you!), find outreach opportunities, be an active ally. Simply learning more will make you less uncomfortable with it, and that makes a world of difference to those of us who are living in a coat of it.

We all have insecurities and for me, being gay became an insecurity on steroids. But I was able to take this terrifying thing about myself and turn it into a part I love so immensely. Looking back on the growth I’ve gone through in just a year fills me with great pride and empowerment. Whether it’s fear about your sexuality, body, culture, disability, clothes or stinky feet: don’t let it control you. Talk about it. Own it. It’s the ultimate power move. No matter what it is that you worry others judge, don’t give it that power. The curtain has closed on the other parts I’ve been playing. I’m just me now. And I feel free.