Unmasking the pain: Assistant Principal Miriam Stevenson on taking control of her life 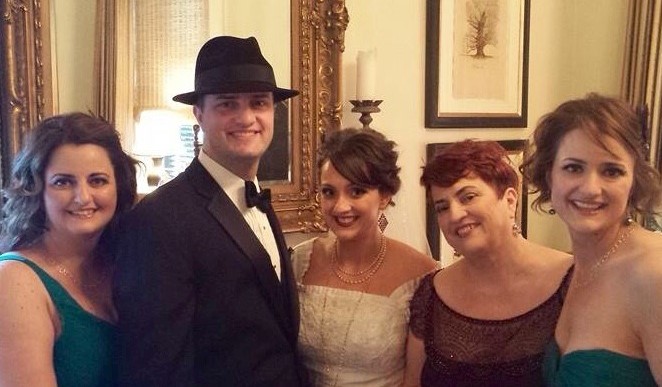 Stevenson with her siblings and mom. Photo courtesy of Miriam Stevenson.

Assistant Principal Miriam Stevenson grew up in an unstable household. Economically vulnerable, her family moved about 19 times before she turned 10. Throughout their childhood, Stevenson and her three siblings underwent emotional instability. Together they endured psychological and physical abuse, their parents’ divorce, supporting their single mother and navigating her remarriage as well as the cultural conflict that was a regular part of their home.

Many of her peers did not realize anything was off. They saw her as successful and involved. “I think on paper, it made me look like I had all my stuff together; I was in a lot of high classes, got good grades, was involved, and I think I gave the appearance that I was functioning really well,” she said. “I didn’t have like a friend group like a lot of the way the Gunn students talk about it, that travel around; I was more like the kind of person who didn’t stay in one place very long, so people wouldn’t notice something was weird or off.”

But many of Stevenson’s struggles at the time were masked. Because of the instability with which she lived, Stevenson couldn’t know what to expect from one moment to another at her own home, the place in which one is traditionally supposed to feel safe. She was not able to trust adults in her life who had power and were supposed to care for her. “You have to kind of be able to read what the current climate is when you come home, and what might set that differently,” she said.

At a very young age, she felt that she had to play the role of an adult. “For a long time I didn’t know that wasn’t normal,” Stevenson said.

One day in high school, at an event similar to Camp Everytown, participants were asked to play Cross the Line. One of the prompts was: “Cross the line if you didn’t feel like you had a childhood.” Out of about 200 students participating, Stevenson was the only one who crossed. “It was the first time I have ever publicly acknowledged that,” she said.

That day, Stevenson felt alone. Her family culture discouraged sharing with others, so she did not reach out for help. “The expectation was you kept everything to the family,” she said. “So you didn’t share, you didn’t report, you weren’t supposed to reach out for help, you wouldn’t talk about that with a counselor. Those types of things were very discouraged.”

Although she had a rocky home life, Stevenson had no power to change her situation. At that age, so little was within her control. “To have an unstable household in addition to no power to change those things, it creates a situation where especially as a teenager, you’re really cognizant that that’s not everyone else’s experience,” she said. “You become very aware that maybe home life for you isn’t the same as home life for everyone else, and so you recognize that there’s easier ways to live, but you can’t change it for yourself.”

As a result, Stevenson came up with her own methods of coping. In high school, her reaction was to get involved to build healthy relationships and avoid being at home. She was a three-sport athlete, joined student government and did whatever she could to find places that weren’t her household. “I would say a key coping thing […] was this avoidance high performance. I had high expectations of myself to try and create a future that was better for me than what I was living in, and so that drove a lot of the performance in high school for me.”

Stevenson also relied on the people who provided her with breaks from her home life. “I had a couple friends who, I could sleep on their parents’ couch, or I had a couple safe havens where it felt like I was in what I imagined a safe home would be like,” she said.

Masking her struggles and projecting a persona of success did help Stevenson. If she felt put together, she would feel more confident. Even today, having a clean house, a nice outfit, or a washed car can positively impact her mood. “Those small things can make a difference, because there is a saying: ‘sometimes you have to fake it until you can make it,’ like you have to project how you want to be even if you’re not feeling that way because it will manifest and so sometimes that comes with confidence,” she said.

Stevenson’s hope came in the form of a better future. She would tell herself that when she grew up, she would have the control to make her situation better. “I guess the mantra became like, ‘I’ll do something different when I have the ability to,’” she said.

For Stevenson, learning to forgive people who harmed her was also important. “Forgiveness, while it does not forget that experience, obviously, it does allow you to not let it continue its negative impact,” she said. “You can gain some control by how you decide to let things impact you and to take away the positive elements and how it shaped you, and not resonate on the negative impacts, because that continues to give away that power to that situation. Forgiveness doesn’t mean absolution; it means I’m limiting how much I’m going to hold onto that and let it negatively affect me in the future.”

As a result of both forgiveness and hope, Stevenson gained a lot of independence and learned to rely on herself. She started working at a young age and moved out as soon as she could so that she could gain control over her journey. “I paid for college myself because I didn’t want to owe to anyone besides me,” she said.

Stevenson’s experience was the reason she chose to go into education in her 20s, despite the fact that she had already built a different career. “I went into education because I was choosing whether to be an advocate for students or for minors on a legal frame, or being involved in education and hopefully being [the person] I needed when I was a teenager,” she said. “I chose education over going into law because I felt like it could be more preventative rather than reactive.”

Remnants of her experience now are not traumatic, but give her strength. “I’m very strong; I’m very resilient; I can cope with a lot of difficulty,” Stevenson said.

“I’m very strong; I’m very resilient; I can cope with a lot of difficulty.”

As a result of her own ordeals, Stevenson has learned to be more empathetic. Her mantra now is “everyone has something that they’re dealing with,” regardless of how they present themselves to the people around them.  “I know what it’s like to mask that way and to present that way and for people to assume and to project that and to be in pain and to have difficulty underneath,” she said, “so I always presume that people I interact with are carrying around burdens, I just may not know or be allowed to know what they are, but that everybody has a journey and that everybody has problems and pain, and so I try to meet people in that place rather than presume what they are projecting to be.”

Now, Stevenson turns to her support network when she needs it: her siblings, friends and husband. “My siblings and I have become really close as a outcome even though our experiences were very different at the time and we didn’t talk about it,” she said.

Stevenson has also held onto the friendships she valued in high school, and has collected “quality” people from different parts of her journey, especially those who can help provide perspective. “I look for people who it’s comfortable just to be myself, where I don’t have to be put together, where I can be a mess, where we have a similar humor,” she said. “People who can remind me of how far I’ve come and how well I’m coping on the continuum as I continue to grow and deal with difficult things.”

Even as an adult under stress, Stevenson still deals with avoidance, often diving deeply into things that make her feel productive or successful instead of talking about her feelings or connecting to people who can help her. “I’ve had to be really aware of that and really utilize my support network of friends and family who help me make sense of things, help me navigate my emotions and help me make choices that aren’t avoidance and confront things that are difficult for me, and engage in that rather than engage in work or things that maybe don’t help address the issue,” she said.

When she’s having a really hard day, Stevenson will call a particular friend and leave a voicemail. “We have an agreement: I’ll leave a three-minute, five-minute voicemail, she’ll listen to it, and she voicemails me—because we have a hard time catching each other with each other’s schedules—and will have responses to everything that I’ve said and share her own,” she said. “It’s making sure I’m sharing where I am and not keeping it all to myself still. Because that was one of the negative ways I coped, was to keep it all inside.”

In fact, though she is now very open with her friends, Stevenson wishes her younger self had shared more with the support network surrounding her. “The thing that I would want other people to know in similar situations or who are dealing with things that feel so beyond their control or feel like the world around them is just hard to navigate and impossible at times, is the power of talking about it because I did not do that—the importance of building that support network while you were going through it,” she said. “I would do that differently, so finding people who were trustworthy who can help you, that it’s not the end of the world, that there will be things that come from it that are good and there will be things that come from it that are bad, but that as bad as it will seem in a moment, that it will get better if you’re actually sharing that with someone else. That burden is too much to keep to yourself.”

If she had reached out to those around her, Stevenson believes she would have had an easier time coping. “I think it really is that coping as things are happening and connecting to people during it, so that you’re never alone, in pain, or suffering silently or keeping it all in, because at some point it needs to come out and you got to work through it and it’s just delaying or making that problem harder,” she said. “I know now that other friends were going through similar things, but I didn’t know it at the time and it would have been helpful to know I wasn’t alone, like I felt the day I crossed the line.”

For those going through difficult situations, try to reach out to the people you trust, Stevenson says. “Your experience could save someone else, and just not being alone in your pain is so important,” she said. “There are people who have skills to help you process it in a way that is much easier than processing it on your own or trying to, especially if you don’t have much control or power over that.”