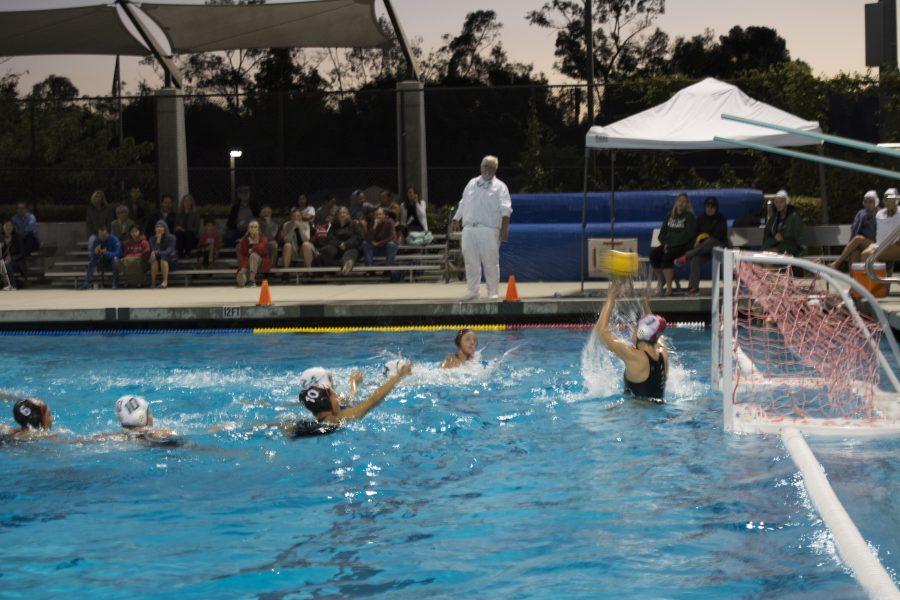 The girls’ water polo team has lofty goals for the season. Winning all games but one in Santa Clara Valley Athletic League (SCVAL) to Mountain View according to Max Preps, they are 10-2 overall and 5-1 in league. This year, they would like to return to the league championship game. Having previously made it six years in a row, they did not make it last year, finishing third instead. “We want to make it back to that game,” coach Mark Hernandez said. From there, he said, they hope to win that game, and make it to the top four or better in Central Coast Section (CCS).

The team is stronger this year compared to last year, having retained more seniors, so everyone is experienced in their positions. “The two previous years, so after the 2013 season, we lost seven seniors, and then in 2014 season, we lost eight seniors,” Hernandez said. “So we lost a lot of seniors over the last couple of years, and so last year, we had a whole new starting lineup. Everyone was in a new position, and this year we return our starters. And that matters a lot that we didn’t have to start over again. Because last year we didn’t have any senior starters and so everyone came back and we have had more games under our belt.”

Sophomore Kara Jacobsen experienced the effect the loss of senior starters had on last year’s team. “The bench players had to all of a sudden start and be running the team as juniors and sophomores, so that was a big problem for the team,” she said.

The team has a 15-minute discussion and two hours of playing in the water every practice, according to Hernandez. However, the girls’ water polo team is not perfect. “We need to communicate better thus far, and we need to have better spacing on the offensive end,” Hernandez said.

In addition, Hernandez emphasizes the importance of staying in the moment. “When we stay in the moment, we are very, very good,” he said. “And then sometimes, we get ahead of ourselves, and look too far ahead, or get stuck with what just happened, we struggle.”

Senior Sylvia Illouz, one of the team’s five seniors, believes the team makes strong in-game adjustments. “Basically we have learned to tailor our defense to whatever the other team is doing,” she said. “It’s helped us a lot.”

For Illouz, a challenge this season is staying in shape. “Just pushing ourselves in practice so that during the games, we can feel like we can play an entire game without being too tired,” she said.

Illouz also agrees with Hernandez that another weakness is communication. “We kind of tend to stay quiet on defense, where that’s actually the most important time to talk and communicate and be verbal,” she said.

According to Hernandez, junior Zoe Banks is one of the star players on girls’ water polo. “People will come to watch Zoe Banks,” Hernandez said. “She’s our junior goalie; she’s really outstanding.”

Banks believes the team has great chemistry. “That allows us to do a lot in the pool, because of team bonding,” Banks said. “This season, we’re all very serious about it and focused and bring our best to practice but also to games. I think last year it was about adjusting to high school level because we had a lot of young players, but now we’ve adjusted so much; it’s really great to see us come to practice so focused.”

Jacobsen agrees, attesting to the close-knit community the team has built both on and off the field. “Besides the fact that we’re really close, it’s basically the same team as last year,” she said. “We all know each other really well and we care about each other a lot.”

Banks is looking forward to what the season will bring. “I’m looking to seeing how far we go in CCS,” she said.