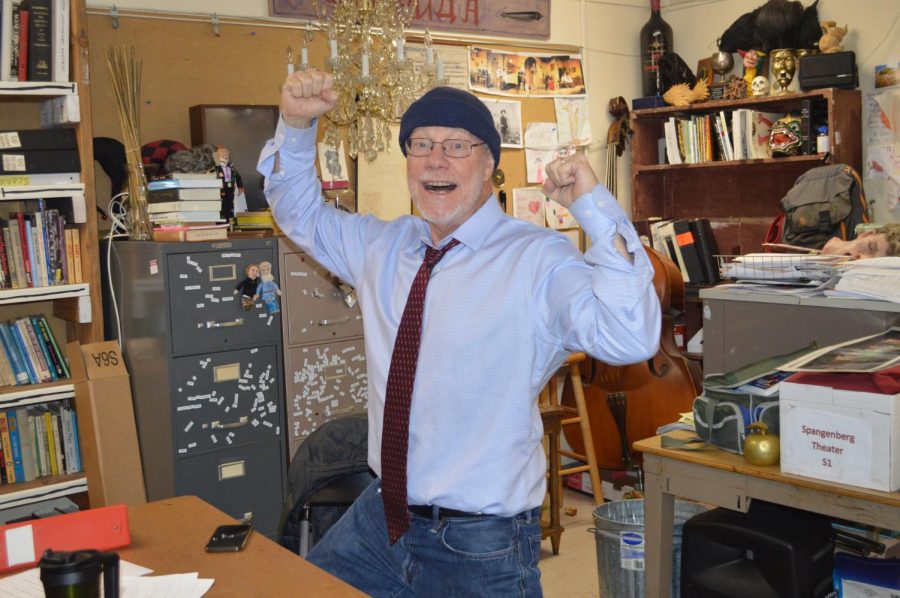 Theatre teacher James Shelby relaxes in the comfort of his office

Read, cast, practice, perform and repeat; for 37 years, performing arts teacher James Shelby has been sharing his passion for theatre with his students.

After a year of the Stanford Teaching Education Program, Shelby arrived at Gunn in the fall of 1983 when he was 28 years old. At the time, Gunn appeared to have no more available slots when he went looking for an open position for teaching English. Upon arriving at an informational interview, however, he was offered a teaching position for his first love: theatre.

Shelby found this opportunity a pleasant surprise, and described the interview positively. “It’s like going on a date that wasn’t a date, and you didn’t know you were dating,” he said. However, Shelby recalls an emotional and maturing development as well. “It’s like a standing wave in a river,” he said. “It’s new water all the time…with the standing wave of great, excited, thrilling 14 to 18 year old kids, [but] I get older as they come. So, my perspective with them has definitely changed.”

Despite his many years of teaching, Shelby makes sure his classes are never boring, whether it’s by switching the curriculum or bringing in new materials. Even when cycling through the same play, there’s always a fresh change. “Everything about it is different, yet it resonates. So it’s sort of old and new every time,” Shelby explained. “And I have new kids. For goodness sakes, I teach ‘Hamlet’ every other year. You go, ‘Oh, don’t you get tired of it?’ and I never ever do.”

One of Shelby’s favorite memories was in 2001, when he directed “Romeo and Juliet.” He was considering stopping teaching theatre, but changed his mind while watching the play unfold. “The last moment was chilling to me,” he said. “The audience [felt] it and I felt it. And I realized ‘Crap, I can’t quit theater. I love it too much.’”

Ultimately, it’s the students that bring Shelby back every year. “Young people that come into my world are creative,” he said. “I have the best students and best community in the world. It couldn’t have been a luckier twist of fate for me.”