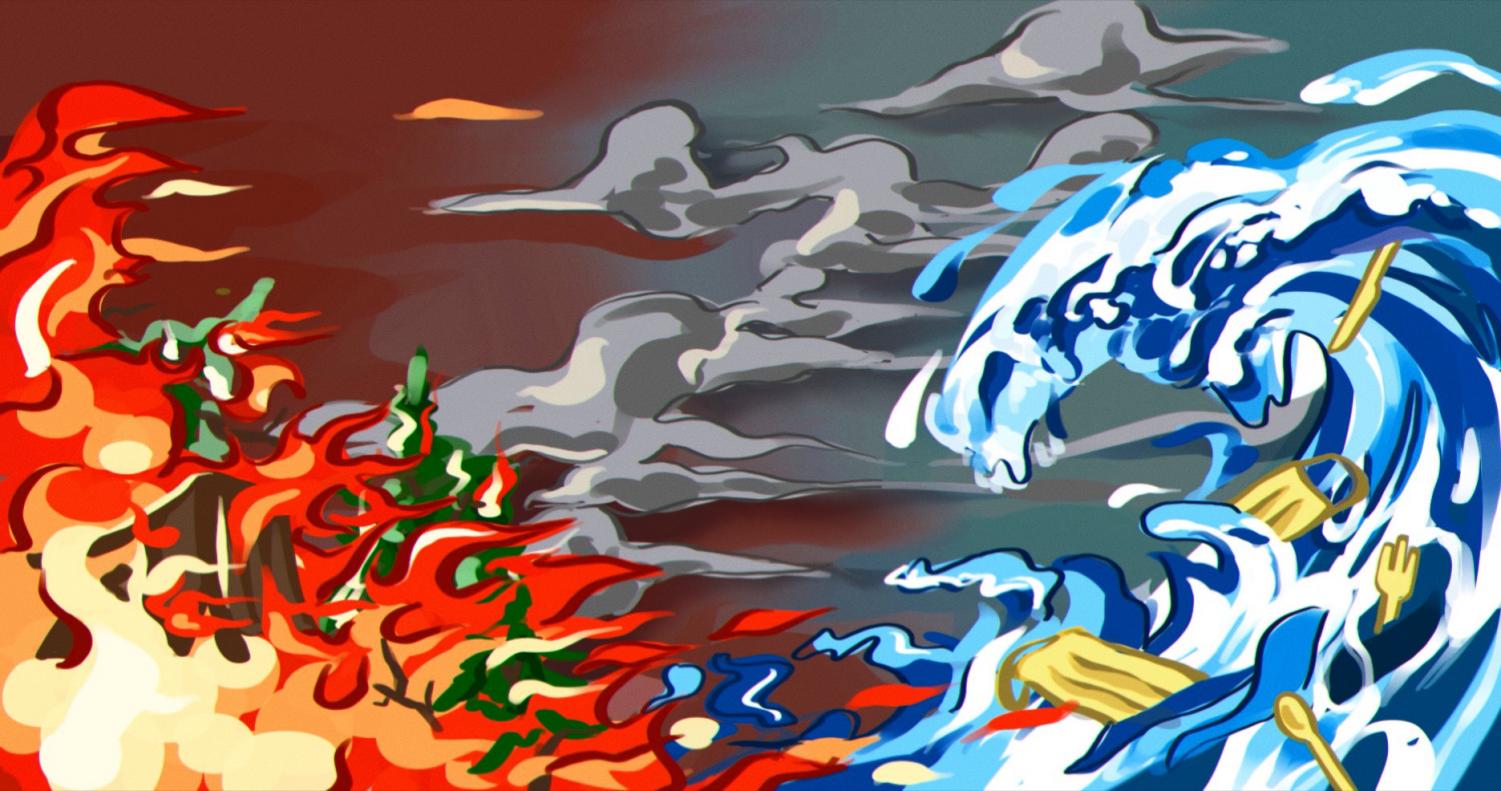 For many, the first noticeable wildfires were in 2017. It was the first time that smoke polluted the air so much that it was unsafe to even step outside; it was the first time that many people tuned in to the news with rapt attention, watching fiery plumes envelop trees and homes; it was the first time that many people saw that red sun that is now so familiar to us all. But in the four years since then, there have been major fires every year at the same time, enough for students to recognize a distinct “fire season.” As much as we’ve had wildfires ravaging our state at a predictable time each year, those who don’t directly suffer the consequences of the fire simply brush it off as normal. They say, “It’s just part of living in California”; something you have to deal with. However, these wildfires are not normal: they’re a symptom of our atmosphere heating up and our climate changing. Unless we take individual and governmental action right now, we won’t be able to remember a year when we didn’t have to hide from a sky grey with ash.

Unless we take individual and governmental action right now, we won’t be able to remember a year when we didn’t have to hide from a sky grey with ash. ”

From Dec. 2011 to March 2019, California was officially in a drought: the ground was cracked and dry, and water had to be saved and regulated. It was during this period that we first began to see the huge wildfires that came with the transition to fall—hotter temperatures continued to dry out forest floors while winter snow melted sooner and left our forest floors vulnerable for longer. This year, we saw both natural and man-made causes for the fires that pervade the air outside. Just a few weeks ago, many of us were kept awake by loud and violent thunderstorms that continued for hours on end—and sparked numerous wildfires. Conversely, the El Dorado fire, currently burning its way through San Bernardino county, was started by a smoke-generating pyrotechnic device used in a gender reveal party.

The effort to prevent fires is a burden placed both on us and our state government. As environmentally conservative citizens, it’s imperative to ensure that campfires are put out and that no one drops any cigarettes on the ground. If you’re up in the hills or out camping and see an unattended fire, report it, make sure that there’s no flammable liquids being spilled onto the brush, and hey, maybe don’t set off pyrotechnics in the middle of a forest?

As for the government, there are two directions to take. One is to fund our firefighters and place money into funds that will combat these fires.  While this is essential, we must also focus on the root cause of the fires. The climate is changing, and each year it seems to be getting worse. Greenhouse gas emissions are polluting our ozone layer, and that, in turn, increases the global temperature. With the withdrawal of the U.S. from the Paris Climate agreement, a United Nations backed resolution to cut down on greenhouse gas emissions, we have even less time to get things right. Our other choice is to convert to sustainable energy sources and pass the Green New Deal in Congress, which is currently the clearest path to progress. The deal states that Earth must achieve net zero carbon emissions by 2050 and lays out a ten-year plan for the United States that will help lead us down that path. As much as individual efforts will help, we need mass government oversight on this issue.

This past week’s insufferable heat is just another symptom of global climate change. Sitting in front of a fan all day shouldn’t be the new normal, and neither should power outages. As much as each person has an individual part to play in being environmentally conscious, it must be emphasized that all of this can be undercut by a few greedy people. Climate change cannot be solved by incrementalism; instead, this country needs to make some big changes right now, and the best way to make sure that happens is to vote.

In 2018, the Woolsey fire in Southern California caused massive mudslides after it was put out. In a way, that’s how this climate crisis exists in America. We are constantly sliding down a mud slope to impending doom at the bottom. ”

As constituents, it’s necessary to always push our representatives to do better–not just at the national level, but at the state and local level too. Email and call your representatives and ask what they’re doing to help with fire prevention and environmental preservation. Demand that they act because, at the end of the day, their loyalty is not to their own opinions, but to yours. Inquire about what the state is doing to switch to wind and solar power, what they will do to preserve water and how they can prevent and extinguish fires.

In 2018, the Woolsey fire in Southern California caused massive mudslides after it was put out. In a way, that’s how this climate crisis exists in America. We are constantly sliding down a mud slope to impending doom at the bottom. It’s slippery, yes, but it’s not impossible to get a holding. It has to be a conscious effort to climb back up: it can’t be a few minor actions followed by slacking off. From one day to the next, choose to bike somewhere or take the train. Refuse that plastic bag offered at the grocery store, get a reusable water bottle and bring it along everywhere. Making small changes in your daily life to accompany government action is the perfect formula for success. At the end of the day, California is a state with so many beautiful beaches and parks—it’d be a shame to ruin it.

Initially, the COVID-19 pandemic seemed to have a positive effect on the environment: carbon emissions decreased with fewer cars on the road, and wildlife thrived in the absence of harmful human activity. Before the wildfires, it was even possible to see clearly across the bay. However, as businesses have pivoted to the use of single-use plastics for sanitary purposes, there has been an increase in take-out boxes, plastic utensils and disposable masks. The influx of single-use plastics during the ongoing pandemic has negatively affected the environment and has led to reversals of previous strides toward a more sustainable planet.

To be clear, taking precautions through single-use plastics is important for safety: items such as reusable bags could potentially spread the novel coronavirus. When the pandemic began, the Plastics Industry Association sent a letter to the Department of Health and Human Services asking the agency to publicly endorse single-use plastics as a safer option for preventing viral transmission than reusable materials. This claim stemmed from older studies, including one from the Oregon Health and Science University, which found that bacteria accumulates on unwashed reusable bags. However, the same study also found that washing the bags would kill the bacteria.

Despite this, companies such as Ineos Styrolution Group GmbH and Trinseo SA, which supply single-use plastic products, have reported sales doubling. Waste collection agencies report that areas within the United States have increased residential waste by 35%, and some have predicted that a year’s worth of plastic has been generated in only a few months due to the pandemic.

Fueling this recent success of the plastic industry are the same health concerns regarding the potentially unsanitary nature of reusable bags. Taking advantage of this unfavorable view toward their eco-friendly competition, some companies have lobbied to loosen plastic bag restrictions. Reversal of plastic bag bans could wreak havoc on ocean habitats, causing immensely harmful pollution for aquatic wildlife.

Additionally, personal protective equipment (PPE) has been essential for health workers during the pandemic. PPE is mostly composed of synthetic materials, and this equipment has been found carelessly discarded in gutters and washed up on beaches. As masks have become a requirement in most states, they’ve posed a greater threat to our environment as litter, sometimes even strangling aquatic animals.

Despite safety concerns, there are still ways to be environmentally friendly during COVID-19, including using reusable masks, purchasing durable water bottles, and carrying groceries out to put in reusable bags.

The pandemic won’t last forever, but the consequences of plastic use will linger long after COVID-19.”

Efforts to save our environment and reduce waste seem to be moving backwards now, as companies use fear of virus transmission to encourage the use of plastic materials. The pandemic currently shows no signs of slowing down, and PPE is necessary for the safety of all. However, the effects of plastic materials on the environment need to be addressed, and waste should be minimized or responsibly disposed of. The pandemic won’t last forever, but the consequences of plastic use will linger long after COVID-19. It’s important to take care of our planet because once the damage is done, it can’t be reversed, and future generations depend on the actions we take now.