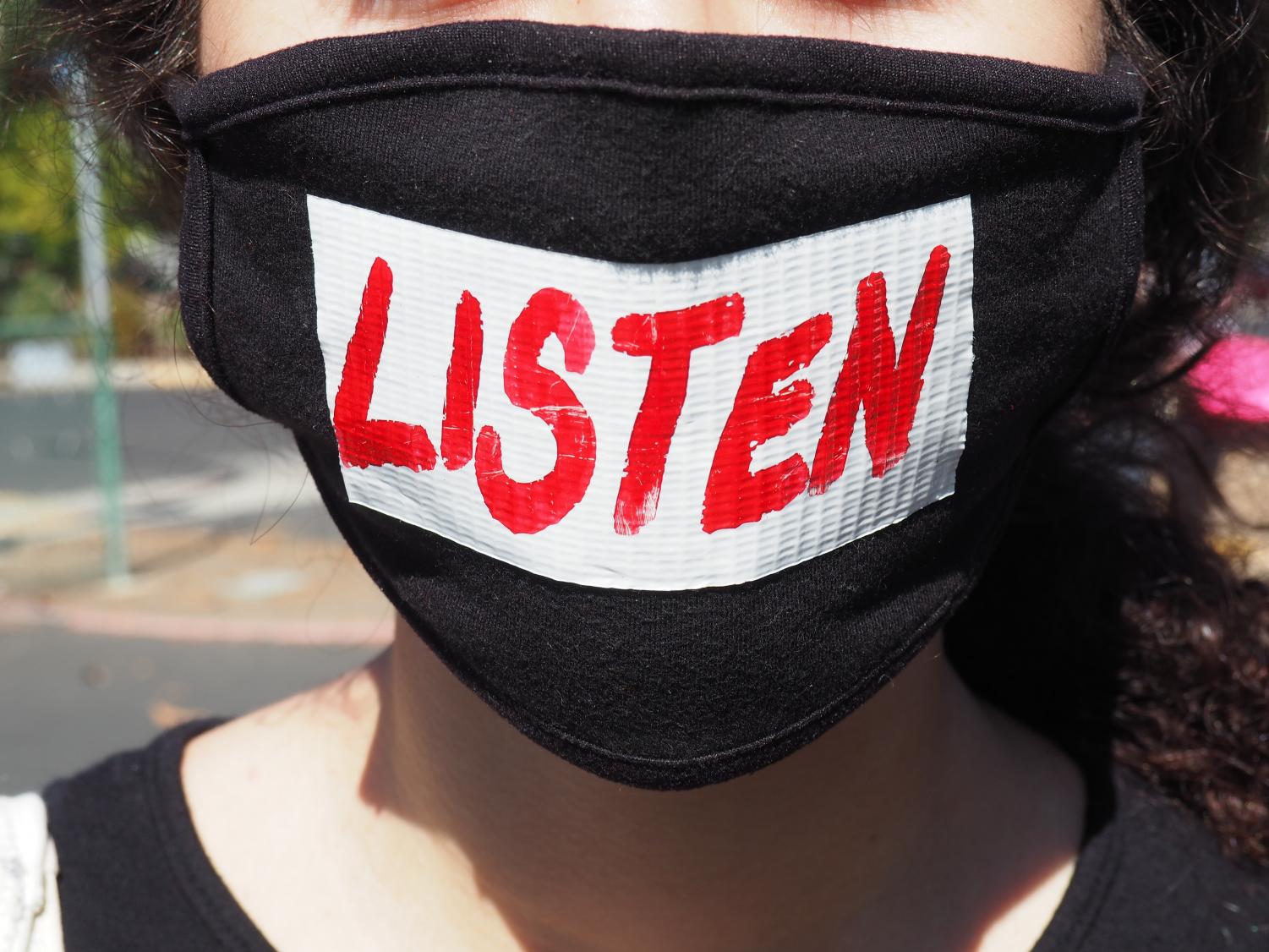 Students and community members are speaking out against the Santa Clara County Board of Supervisors' Sept. 22 decision to delay an investigation into Title IX policies, citing a need for immediate action. Content warning: sexual assault, sexual harassment.

“LISTEN,” read the letters across the masks of protesters; chants of “stop the violence, no more silence!” echo outside the house of Santa Clara County Supervisor Joe Simitan.

The socially distanced silent vigil and protest, which was held Sunday afternoon, came on the heels of Simitian voting to delay a county-wide investigation into how local school districts handle Title IX cases. Fittingly, the organization responsible for the protest is Gunn’s Title IX club, a club created in large part due to the changes made to Title IX policies earlier this year.

On May 6, U.S. Secretary of Education Betsy DeVos rolled out a series of new amendments to Title IX, a federal law that prevents discrimination on the basis of sex, gender, gender identity, pregnancy and parental status. The law, first introduced in 1972, has been expanded in subsequent years to address sexual assault and harassment complaints.

Last spring, the U.S. Department of Education ceased the requirement that schools and districts follow a set timeline when investigating Title IX cases; previously, high schools and colleges had to respond to a Title IX complaint within sixty days. Although PAUSD has chosen to adhere to the previous guidelines, concerns have been raised over other districts failing to respond to complaints in a timely manner.

Last spring, the U.S. Department of Education ceased the requirement that schools and districts follow a set timeline when investigating Title IX cases.”

Given the new, relaxed provisions, the Santa Clara County Board of Supervisors has considered investigating local districts’ policies regarding sexual harassment and discrimination. However, on Sept. 22, three out of the five board members, including Simitian, voted to delay such an investigation, sparking outcry from students and community members–and leading to the Oct. 11 vigil.

The Board of Supervisors will next vote on the investigation on Nov. 17. 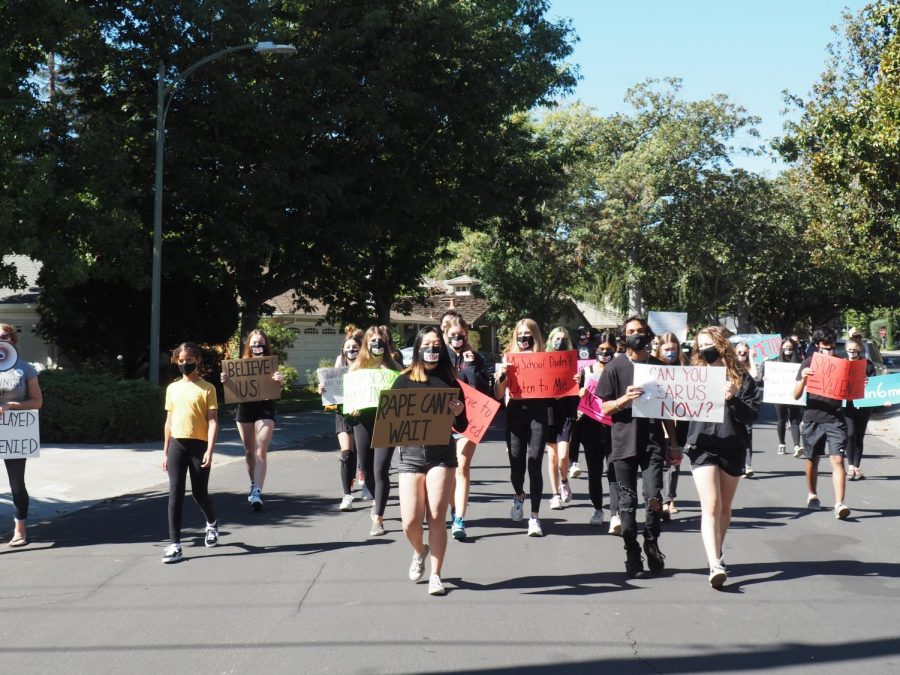 Other new Title IX changes decried by critics include schools no longer being held responsible for cases that do not occur on school grounds or school-associated platforms and a narrower definition of “sexual harassment.” Under the new definition, sexual harassment is redefined to be constituting “unwelcome conduct determined by a reasonable person to be so severe, pervasive and objectively offensive that it effectively denies a person equal access to the recipient’s education program or activity.”

California is one of 18 states currently suing the Department of Education to prevent the implementation of the new provisions. Because the suit is still pending, however, and because the date to begin enforcing the policy changes was Aug. 14, PAUSD has had to enforce the new changes to Title IX.

Senior Rachel Sun began planning the Title IX club in May in response to the federal-level changes to Title IX, as well as to call attention to district mishandling of Title IX complaints. This fall, the club was officially chartered.

Senior Isabella Pistaferri, a member of the club, raised concerns that the new level of specificity for defining sexual harassment would cause valid cases to be dismissed. “They make the qualifications for something to be declared as an infringement of Title IX to be super specific, as if these cases are cut-and-paste clear,” Pistaferri said. “Obviously, every one case is different and they need to be looked at with empathy.”

If you do have a case where someone is harassing you, but the school deemed that it is not effectively denying you access to education, then you basically don’t have a Title IX case.”

Since the provisions now require sexual harassment to be so severe and pervasive that it obstructs learning, as per the revised definition, more moderate cases risk being thrown out. According to the new regulations, PAUSD Title IX coordinator Megan Farrell is required to dismiss all formal complaints that do not fit the new definition, even if the Title IX case proves true. However, complaints may still be pursued under the district’s Uniform Complaint Procedures (UCPs).

Sun is concerned about the ramifications of the Title IX changes for the district. “PAUSD is going to pick the better option when given an option,” Sun said, referencing the district’s ability to self-enforce the previous 60 day timeline for addressing complaints. “But, there are certain things where their hands are tied. For example, [they can’t change] the sexual harassment definition. If you do have a case where someone is harassing you, but the school deemed that it is not effectively denying you access to education, then you basically don’t have a Title IX case.”

A history of mishandling complaints

Indeed, PAUSD has a history of mishandling Title IX complaints. In 2019, for example, a $150,000 settlement was given to a female student at Gunn after PAUSD failed to handle the student’s sexual harassment case in a timely manner, according to Palo Alto Online. The settlement was voted on and unanimously approved by the PAUSD board to end the legal battle with the Gunn student. However, the settlement did not imply PAUSD would take responsibility for any allegations of wrongdoing in the case.

Pistaferri joined the club because of her dissatisfaction with past handlings of Title IX cases. “I had my own experiences in reporting a Title IX and I was not satisfied with how the school and district handled my case,” Pistaferri said. “I thought that in order to have my voice heard it would be a good idea to come together with people who have had similar experiences and work together.”

The investigation delayed by the Santa Clara County Board of Supervisors would look into the past handlings of such cases. As such, Title IX Club Secretary senior Kacy Gao expressed concern over Simitian’s quick rejection of the investigations. “I don’t understand why he would just shoot it down immediately,” she said. “He should have worked for it and supported it because the people who were going to conduct the review were totally for it. When we are cast aside like this systematically, people forget that we’re talking about lifelong trauma. Rape is lifelong trauma. And we should treat it as such.”

Simitian, on his part, voted to delay the investigation due to what he viewed as unrealistic expectations. “I think that I would not want us to give folks false hope that we were going to be able to tackle a set of serious interests, with the comprehensive attention and expertise that they deserve, and anything like that on the timeline of Nov. 17,” Simitian said during the Sept. 22 board meeting. “We should not do anything other than our best if we’re going to tackle the subject. It is in my judgment a matter of years of effort and millions of dollars. That doesn’t mean it shouldn’t get done. I just think we need a realistic assessment of what this is.”

When Simitian and two of his fellow board members voted to delay the investigation, survivors like Pistaferri felt that he was denying Title IX the attention it merited. “I hope not just [Simitian], but the district and the whole Santa Clara board and honestly, anyone who is faced with the decision on these issues, will listen and see the impact,” Pistaferri said. “A lot of the time I feel as though they assume that the impact is not as grave as it is put out to be, but no, we are hurting and we want change.”

Calls for attention and advocacy around Title IX

Sun is passionate about students standing up and speaking out about Title IX-related issues. “I think people don’t realize how important it is to be engaged in your community–there are a lot of changes that you can make as a student,” she said. “Show up at a board meeting or show up at a county meeting, go to a protest, talk to the administrators. That way you can get things done.”

Another action item Sun is pushing for is more accessible Title IX complaint resources on school websites. “We have been asking for the administration to put a button on the Paly, Gunn and middle school websites, directing people to how to file a Title IX complaint and how to go through that process,” Sun said. “It would probably take them one hour to put a button on there, and they still haven’t done it.”

If the system continues to not listen to us, we are going to keep acting up and fighting back.”

Title IX Club Director of Education senior Quentin Swindell believes that protests and vigils, like the one held on Oct. 11, are essential for highlighting how schools are addressing sexual harassment and sexual assault. “I think that the county and the community as a whole just doesn’t acknowledge [victims of sexual assault and harasssment], so I really think that protests are a good way to show that we do have a voice and show that our opinions do matter and that it’s widespread throughout the student body, not just a few voices,” Swindell said.

The Santa Clara County Board of Supervisors is projected to vote on whether the county investigations will take place on Nov. 17. For Title IX club members, even if the vote does approve the inquiry, fighting for victims of sexual assault and harassment will remain as important as ever. “If the system continues to not listen to us, we are going to keep acting up and fighting back,” Gao said.