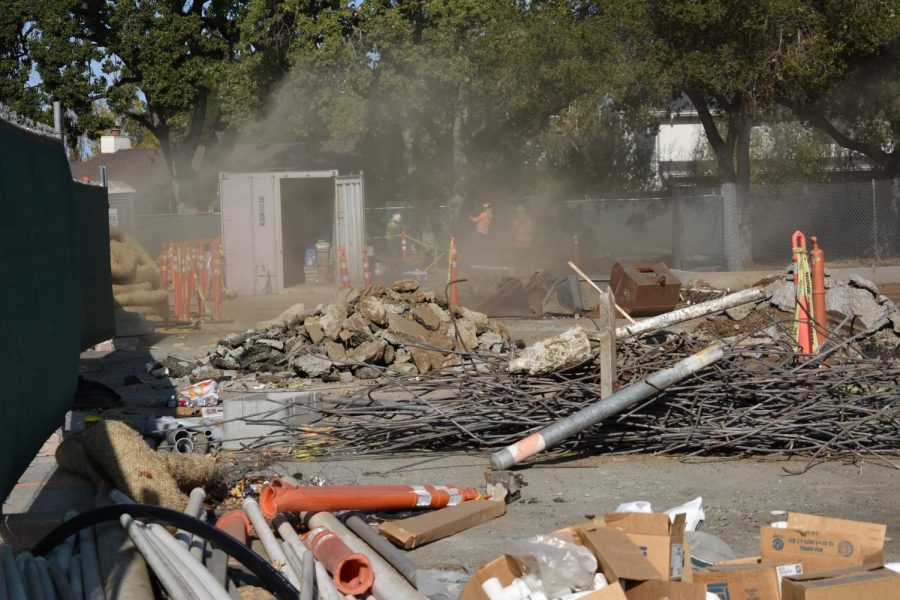 Since June, Gunn’s main parking lot has been under construction in order to create a bike path, add additional parking spaces and improve the flow of traffic. Because construction has continued into the beginning of the school year, parking permits have been restricted to staff and visitors only.

The main goal of the construction is to improve the flow of traffic and make it easier for bikers to commute to school, according to project supervisor Assistant Principal Leonel Argumedo. “The bike path from Arastradero to the Village will be paved with gravel, so it should be a lot smoother of a ride for those riding bikes on campus,” he said.

The project was originally predicted to be completed by the beginning of September, but that date has since been pushed back to the first week of October, according to Argumedo. “Initially, the contractors told us Sept. 1, and then that got pushed to Sept. 18,” he said. “Now they’re telling us the first week of October. By the end of September, we should have a better indication of what the completion date is actually going to be.” The unexpected extension of the construction project has caused issues for students driving to school. Parking permits are only being issued selectively to students, and those without a permit may not park in the parking lot. As a result, more students are parking in the surrounding neighborhoods and streets, such as Georgia. The Palo Alto Police (PAPD), however, has been ticketing both students and staff who park in the incorrect areas of those streets. “If you do get a ticket, there’s nothing Gunn can do about it, because it is through PAPD parking enforcement,” Arugumedo said. “As far as parking on Georgia [Avenue], I would just say that you should follow the signs, because I understand there are some restrictions.” Students and staff without their permit visible on their car can receive a ticket if they parked in the parking lot.

Students had hoped that the construction would be completed before classes resumed so that the Gunn parking lot would have open access. Senior Catherine Hsieh expressed frustration regarding the parking lot completion dates. “They should have done it during the summer when none of us were at school,” she said.

Senior Max LaWer is also disappointed with the fact that construction is happening during the school year. “They had all of the pandemic to do it, but they chose to do it now,” he said. To alleviate serious issues, some students have been given permission to park in the parking lot by the Gunn administration due to special circumstances. “We are issuing temporary permits for students who might have some hardships, but we do have limited spacing,” Argumedo said.

Junior Pooja Bucklin had been parking on Willmar Drive, just off Georgia, before receiving a permit to park in the Gunn parking lot due to a foot injury. “I live three miles away from Gunn, so I have to leave 30 to 40 minutes before school to get to school on time,” she said. Bucklin also mentioned how her commute is made slower due to not only the construction, but also traffic and crowds of bikers. “It has definitely made my commute way longer, and its become a lot more crowded everywhere,” Bucklin said.

Senior Sawyer McKenna received a parking permit because she does not live within walking or biking distance from school. “I live in San Mateo half of the time, so I emailed Mr. Arugmedo and told him I need to be able to drive to school,” McKenna said.

Despite some special parking permits being issued, most seniors still have limited access to the parking lot. Seniors have expressed frustration about the impact the construction has had on their daily commutes to school. Hsieh lives about three miles away from school and drives every day, but parks far from campus and has to walk the rest of the way to school. “I have to park at a friend’s house far from school and then walk, which means I have to leave my house earlier to have time to walk to school,” Hsieh said. “So sometimes I’m late to school.”

LaWer echoed Hsieh’s sentiments. “It’s really annoying to not be able to park in the parking lot,” he said. “You have to park on Georgia [Avenue] and walk ten minutes, and I’m late to classes sometimes. It’s really a pain.”

As a result of the volume of students parking their cars on Georgia Avenue, traffic has greatly increased, in addition to the typical bike and pedestrian traffic. “Some of the cars in front of me wait behind the bikers instead of going around, which holds back the entire line,” Hsieh said. Georgia Avenue doesn’t have a consistent dedicated bike lane, so bikers bike freely on the road.

Despite having a parking permit, McKenna still feels like the construction has affected her. “The construction definitely has impacted me because now I feel like I need to drive more people to school since I have a [parking] permit and they don’t,” McKenna said. “It’s also hard to make plans with people after school because they’re parked far away. I either have to wait for them or drive them to their cars.”

Even with a hectic first few days of school, staff members haven’t run into many problems with navigating through the construction and finding parking. English teacher Ethan Halter has been satisfied with how Gunn has addressed the parking concerns for staff. “We are blessed to have the funding to maintain such quality infrastructure here,” Halter said.

Students without special circumstances who would like to get a parking permit must wait until the construction is finished to purchase one. “Once the parking lot is completed, the SEC will be able to sell parking permits, with seniors being the first priority,” Argumedo said.

Argumedo is also looking to work with the district to reserve a set number of spots for electric vehicles to charge on the Miranda Avenue side of campus. “As of now, all staff are allowed to park back there [on Miranda Avenue] even if they don’t have an electric vehicle,” he said. “So what we’re trying to do is set some parameters around who can park out there.”

Campus Supervisor Jorge Sanchez, who directs the traffic in the parking lot, says that despite construction, drop-offs and pickups from school are running smoothly. “All I can ask is for drivers to be a little slower and careful,” Sanchez said. “Be aware of your surroundings [and] for students and cyclists.”