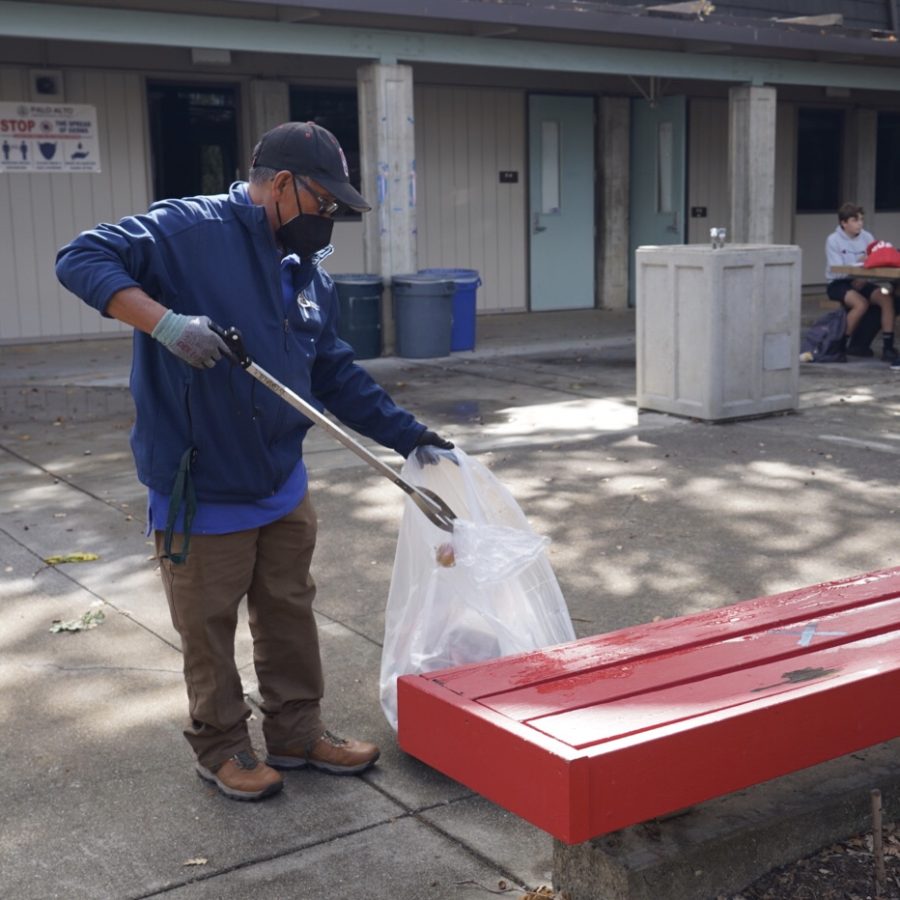 As students return to in-person learning, the influx of trash left on campus has drastically increased the workload for the custodial staff, leading to less time allotted for customary responsibilities. Day Shift Custodial Supervisor Luciano Hernandez has been a part of the custodial staff for 22 years. “Here at Gunn, we take a lot of pride in the work we do,” he said. “We do our best to keep the school and campus clean, and we do it for the students.”

According to Hernandez, however, the workload this year has doubled in comparison to past years. “It’s frustrating because the added work takes away from regular scheduled duties,” he said. “We can’t work overtime.”

Other campus members have also noticed the issue. For teachers like Science Department Instructional
Lead Laurie Pennington, who have classrooms in close proximity to some students’ lunchtime hangout areas, it is frustrating to see the trash left behind. “It is disheartening to see students just get up and leave without considering whether or not they’re leaving a mess behind,” she said. “Yes, the custodians can clean your mess up, but they can do other things if they don’t have to clean up after you.”

Campus Supervisor Travis Schollnick believes that the implementation of California’s Free Lunch Program in response to the pandemic has played a large role in the doubling of the custodial workload. The program
has not only brought on a slew of new disinfecting protocols, but it has also encouraged many students to pick up lunch on campus that features items covered in plastic and paper wrapping. “The students have had a year and a half off, and they’re taking the opportunity to be more free than they’re used to being in their homes,” Schollnick said. “Also, COVID-19 protocols have forced student lunch items to be individually wrapped, and that creates extra packaging that can get lost. Outside of this, we’ve introduced new changes that mean prioritizing cleanliness and virus safety for both our staff and our students. Custodians have been disinfecting each room with far more care than before.”

You’ll walk around campus, and there are empty bins with trash laying next to them. It’s hard to know what else we can do.”

Morning Shift Custodial Supervisor Nigel Hansen sees himself and the custodial team as Gunn’s human reset button. “I begin my day at 6:00 a.m. and stay until 2:30 p.m.,” Hansen said. “During that time, I’m just returning the chaos back to its original state. Sometimes there are accidents. [There] could be spilled milk, broken glass and bodily functions. Most of the time, though, I’m going around campus cleaning up, especially after the brunch and lunch breaks.”

To reduce the amount of waste left outside, the administration has made accommodations, including adding trash bins around campus. “We’re really trying to make it easy for the students,” Schollnick said. “There are even trash bins in really unexpected places on the outskirts of campus, since the school is trying to target areas where groups of students convene for lunch.”

Despite the administration’s efforts, students are not taking advantage of the nearby trash bins, according to Hernandez. “You’ll walk around campus, and there are empty bins with trash laying next to them,” he said. “It’s hard to know what else we can do.” Not only do custodians take care of regular campus maintenance, but they are also called to the scene when any unexpected disruptions to campus safety or
cleanliness occur.

In light of the recent “devious licks” challenge on TikTok—involving students stealing or defacing school property—vandalism has been thrust to the center of the workload for custodial staff, many of whom have seen similar cases on a smaller scale. “We are often the first responders in cases of vandalism,”
Hansen said. “There’s always been graffiti, but this year there’s been more than usual.”

These unexpected disruptions have become more prevalent in recent months, leading to more work for the
custodial staff and limiting the amount of school services they can provide. “It’s been bad this year,” Hernandez said. “At one point, all of the soap dispensers in every single boys’ bathroom on campus were out of order. Broken mirrors and toilet seats, stolen seat cover dispensers, graffiti on the walls, soap spilled all over the floor, destroyed toilet paper roll holders—you name it, they’ve done it.”

Like many other staff members, Pennington cares deeply about the community and wants to see the campus in good condition. “It really is disappointing,” she said. “The teachers are part of this place, too. When I see garbage on the ground, I really want to drop everything and pick it up, but I can’t always do that because I’m rushing from place to place. So when I see people deface things, it hurts.”

Students’ failure to clean up their mess not only affects the amount of litter left outside of the bins, but also the organization of waste into the three types: trash, recycling and compost. “We don’t have time to sort each piece of trash individually,” Hernandez said. “With what time we have, we can only sort a bin into recycling or compost if 80% or more is recyclable or compostable. I’ve seen rotten banana peels in recycling bins and plastic wrappers in the compost. It’s something that’s only begun this year.”

By vandalizing the school and littering, you’re not hurting the admin, the school or the teachers. You’re hurting us.”

Green Team President senior Saman de Silva believes that students have an obligation to clean up after themselves, especially as it is a small gesture that will build good habits for students later. “As human beings, it is our personal responsibility to make sure that we dispose of any waste that comes along with our products,” de Silva said. “It requires so little effort. There are trash, compost and recycling bins everywhere. It’s important to build that sense of accountability.”

De Silva believes that keeping students’ surroundings clean is a group effort. “Try to take steps to cover what others may not be doing,” he said. “Even if you’re good about throwing your stuff away, not everybody in the population is. You can go and pick up that piece of trash that somebody left behind. It is so painless. Try and help out in whatever ways you can.”

Despite the heavy load this year, both Hansen and Hernandez are thankful to work at Gunn. “When I see the trash on campus, I think of it as job security,” Hansen said. “There are two sides to it—there is a lot of trash on campus, which isn’t great. But if there’s trash to clean up, it means that I’m needed.”

Hernandez urges students to think before they leave trash on campus or destroy school property. “You have to understand that this is your school,” he said. “This is your home. At the end of the day, we do the cleaning for you. By vandalizing and littering, you’re not hurting the admin, the school or the teachers. You’re hurting us.”