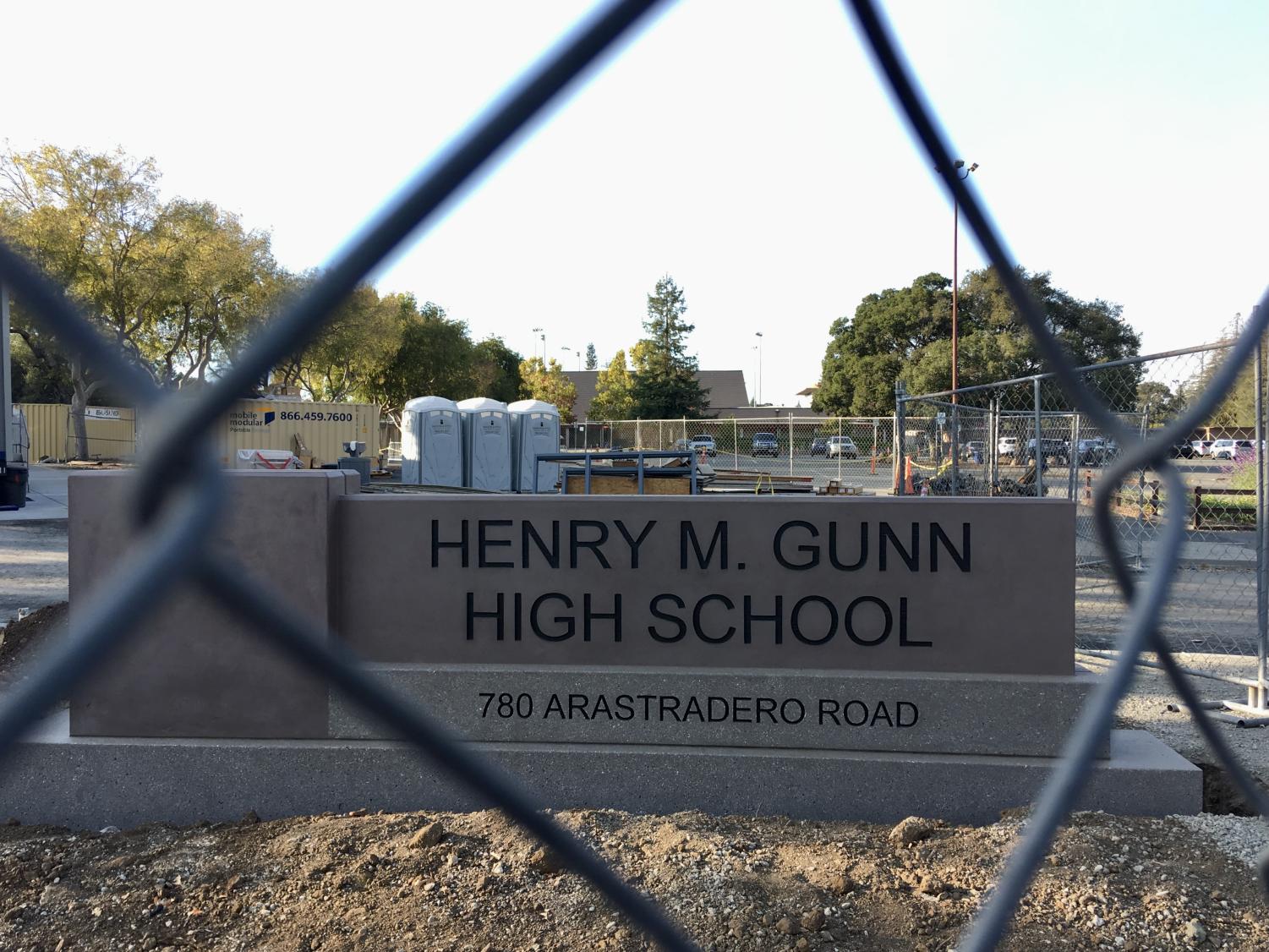 Construction over the years: Campus construction legacy leaves a lasting mark, continues to this day

The echo of clambering of power tools, presence of construction workers busy at work and marked-off construction zones are all fairly normal occurrences for the Gunn community. Following the school’s establishment, construction at Gunn has become part of every student’s high school experience. The district remains firm in setting aside large sums of money for renovations and construction in order to accommodate various needs to provide an inviting environment for students and staff.

In 1964, Henry M. Gunn High School was founded by the Palo Alto Unified School District (PAUSD) due to an influx of new students in Palo Alto. On its opening day, the school welcomed 600 students as well as new teachers. Among them was former chemistry teacher Ron Iverson, who distinctly remembers what it was like walking through Gunn in the 1960s.

When Gunn opened, it was just spectacular: everything had been finished so well that it was a place for tours to be given.”

While some of these buildings still remain today, easily identified with elements of Gunn’s well-known architecture style—low facades, shingled mansards with wood siding and open-air hallways with concrete columns—others have been replaced over the years with more modern counterparts. Places like the Senior Quad, which once had a fountain, have since changed tremendously. “People would be sitting around the fountain in this beautiful raised area,” Iverson said. “The library was right across from [the quad], and behind the library was Spangenberg Theater. Now, it’s a completely different place.”

Even in shorter periods of time, Gunn has still changed significantly. In his 15 years of teaching at Gunn, English teacher Marc Igler recalls a seemingly different campus than the one he now teaches at today. “It’s almost like [teaching] in a new school,” Igler said. “I’ve seen an awful lot of change during my time teaching [at Gunn]. The school’s looking a lot better.”

Recently, Gunn has undergone a multitude of various construction projects. For years following its opening, many of Gunn’s original buildings remained untouched. In 2001, the district first started construction by renovating the interiors of many buildings, creating a new library and adding classrooms to the science building. From 2001-2007, interiors for the Spangenberg Theater, art building, administration building and the library were also renovated.

In 2009, the creation of the N-Building on a previously empty lot began. The project lasted until 2013, and the building now houses all math and English classrooms. During the same time, a world language building was also created to house the various language classrooms. The joint cost of both buildings was around $25 million. The Titan Gym was also created in 2012 at a price of $12 million.

In 2017, the school aimed its focus towards replacing an old building next to the Senior Quad that once served as the school’s library. The construction led to the creation of the school’s second two-story building: the P-Building. The two-year long project simultaneously modernized the Spangenberg Theater and came at a total cost of $25 million.

With the addition of the Miranda Avenue drop-off area in 2014, the district also brought up-to-date various entrances and exits of the campus. In 2021, the school’s parking lot also received touch-ups, benefiting students like junior Aiden Man. “I usually walk or take the bus to school, and have noticed that the flow of traffic is smoother, making it easier to travel in and out of the parking lot,” he said.

The process begins with a “master plan,” which lists all the areas needing renovations or a complete upheaval that is created by members of the district. “It’s looking at the needs and asking if they can be accommodated in the current space or if the school needs a new one,” Holm said. “Sometimes it’s brought forth by the site, by the superintendent, a donor-led initiative or other programmatic needs.”

Alongside other board members, board member Jennifer DiBrienza oversees the various steps leading to the proposal of a master plan. “We have staff that tells us how big the scope of a project should be, recommend an architectural firm to go out to to design it and get construction companies to bid it,” she said. “For any construction that happens, the board approves different steps of it about a dozen times along the way.”

Once a master plan is approved by the board, the Palo Alto community votes on whether or not the district should receive a bond to work towards achieving these goals. In 2018, for instance, the district received $460 million in bond money. 10 years before that, they received $378 million.

After the district receives and distributes the money throughout its schools, Holm can work alongside construction workers to begin the development of the project. As classes remain in session despite construction projects, the district takes several precautions to minimize the effects building will have on its surrounding classes. “A lot of times, the louder parts happen after dismissal,” DiBrienza said. “[Besides that,] we really capitalize on the summer. Mr. Holm is ready to go as soon as [students] graduate and then works all summer.”

Although construction can have positive impacts on Gunn’s campus such as providing new, more reliable, environments for learning in the long run, many students argue that it can affect their high school experiences. Senior Sadhya Ananth recalls how past construction projects have disrupted her daily life, despite the district’s efforts to minimize their potential repercussions. “I do not appreciate the construction because it makes it harder for me to leave school, and it makes passing periods longer,” she said.

Furthermore, previous on-campus construction sites have separated areas of the campus and have made it harder for students to traverse it. During the P-Building construction, Student Activities Director Lisa Hall vividly remembers the disconnect between areas of campus. “We had this big fenced off area right in the middle of campus, which divided where people could go,” she said.

We [practically] didn’t have a campus—we just had a construction zone that we lived in.”

Over the years, construction projects have become an inevitable part of most of the time students and staff spend at Gunn. For many, it seems endless. “We have had some form of construction ever since I’ve been here in the last 17 years,” Hall said. “There’s always going to be a building that needs to be upgraded right about the time we finish another section of school. It would be nice to be able to be on campus and not have any work happening, but it’s inevitable.”

According to Holm, construction on high school campuses seems endless due to their size. “It does seem like we’ve been building at Gunn and at Palo Alto High School forever, partially [because] the sites are huge,” Holm said. “There are a lot of buildings, and we’re constantly in a state of rehabilitating or reconfiguring buildings as needed by either programmatic changes, growth of students or just the age of the buildings.”

On a daily basis, over 12,000 students as well as other teachers and staff attend PAUSD schools. The constant use of facilities can significantly affect campus safety. “At a school site, you have a population of a couple thousand kids walking through every single day,” Holm said. “The buildings get a significant amount of wear and tear. We are held to a higher standard than commercial or residential construction on the safety factors of buildings.”

Not only do construction projects create safer, more welcoming campuses for students and staff, but they also help ensure schools remain reliable learning options in the future, according to DiBrienza. “As a district, most of what we do day to day [can be done] without such nice buildings,” she said. “But when you have the support of the community to make those investments, you put [the district] on secure footing.”

Looking forward, the district plans to shift its focus from renovating its high schools towards a more centralized focus on its primary schools. By doing so, less construction projects will occur on high school grounds. “We did work on the high schools and some on the middle schools, and now it’s time to focus on the elementary schools,” Holm said.

Although the district is focusing towards modernizing its primary schools, Gunn will still undergo some construction. Many small and large projects are currently in the planning stages and will begin over the next couple of years. “We have begun slowing down the work on the high schools, but we also have more projects in the pipeline,” Holm said. “We’re going to replace the M-Building at some point in the next decade, update Bow Gym and expand [the] Titan Gym dance and weight rooms.”

According to the district’s latest master plan, other projects include replacing the current administration and cafeteria buildings, modernizing Spangenberg Theater, making changes to the Freshman Quad, altering the science office area, adding CTE labs to the L-Building, improving the Hal Daner football stadium, adding synthetic turf to the soccer field and introducing solar panels into the parking lot.

The replacement of the current administration and cafeteria buildings will be the largest of the listed projects, starting during the summer of 2022 and lasting over two years. The $27 million “A and B project”  will create new buildings that will house not only administration as well as food service, but also a culinary lab, design studio, indoor dining area and large meeting room. “We’re [also] changing the Batcave to be outdoor seating,” Holm said.

With the addition of a culinary lab and design studio, all of CTE Instructional Lead Cindy Peters’ classes will be moved to the new building and provided a selection of new appliances. “We’re going to have a wonderful commercial kitchen, and we’re going to be able to revamp the whole way I teach my classes,” Peters said. “Future construction is awesome, and I’m looking forward to it.”

The district has always had an important focus on construction, one that will most likely continue in the future. Although they can affect student experiences on campus, construction can lead to a host of new benefits for future students and staff. “The school district has always been so powerful at looking ahead,” Iverson said. “They’re definitely doing the right kinds of changes, and that’s what the future should be [like].”

Gallery|6 Photos
Photo of the Hal Daner track from the 1966 edition of "The Olympian."
Leave a Comment