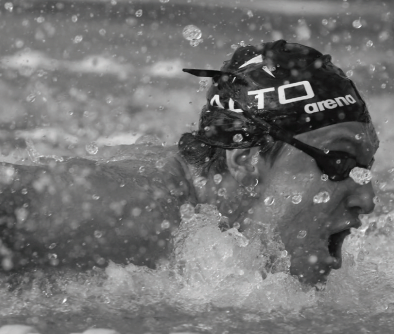 When the last school bell of the year rings, many students eagerly don their swim trunks and congregate at the local pool. Senior Evan Gold was one of these students. Unlike many others, however, Gold wasn’t there to simply have a good time with friends. Instead, he spent countless hours in the pool in the hopes of becoming a better swimmer. Summer break allows Gold to be in the  pool more than he could during the school year. “In our summer training schedule, the training itself picks up,” he said. “We usually have a two hour morning session where we swim and try to hit yardage. We’re increasing our overall workload by the week and then we have a two and a half hour evening session where we do an hour of dryland and an hour and a half of swimming.” This summer, Gold particularly focused on becoming more mobile in the water and swimming with better form. By focusing on the details, Gold was able to improve his swimming times effectively. “I’ve been leaning out [and] cutting unnecessary weight,” he said. “In butterfly, which is my best stroke, I’m lowering my breath so my head comes out of the water
last and I’m more streamlined.” Gold hopes that he is able to improve enough over the summer so that he could eventually become one of the top swimmers at the national level. “One thing I really want to achieve is an Olympic Trials cut,” he said. “They’re really hard to hit and I might not get it, but it’s a long term goal of mine.” As Gold nears the end of his high school swimming career, he acknowledges all that the sport has given to him. Most of all, Gold cherishes the life lessons that he learned during all of the time spent in the pool and will apply them in his future endeavors. “We [learned] a quote before we’d get into the water during our training camp,” he said. “One of the ones that really resonated with me was a [John] Steinbeck quote, and it’s ‘anything that costs money is cheap.’ I feel like I grow more the more I
put into things.”