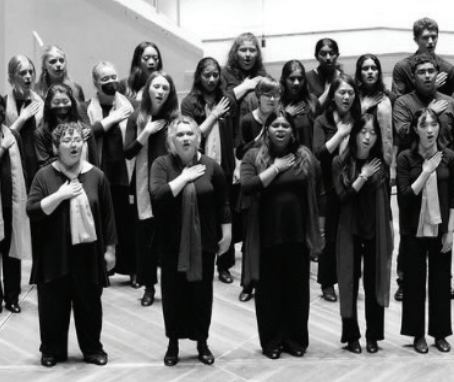 This summer, junior Chloe Chiang left Palo Alto to go on tour with her choir to Germany, Austria and the Czech Republic. Chiang first became involved with her choir, the Cantabile Youth Singers, halfway through sixth grade. This summer is Chiang’s first time touring internationally. “We weren’t competing or anything, it was just a [way to] get to know other choirs in the area,” she said. “We got to sing with a choir from Norway, two choirs from Berlin and then a choir from Vienna, which was cool. We
sang at six different concerts over 10 days.” Chiang’s favorite part of the trip was the time she spent with her choir between performances. “Part of why tour is so important for us is because you get to meet so many new people not only outside of your choir, but also within your choir,” she said. “Normally, we only meet once or twice a week, so part of what made the tour so fun was that I’ve met a lot of new people. I have a really great support group now.”

Though Chiang noted that it would be difficult for her to name a favorite piece she performed, there is one song that holds a unique sentimental value for her. “We sang this song on tour [which] was a mash up between ‘I Love You’ and ‘What a Wonderful World’,” she said. “I think that song has a special place just because it’s the song that the seniors sing their solos.
It’s kind of special because their moment is saying goodbye, but also where we kind of get to
support them, their voices and personalities in general.”