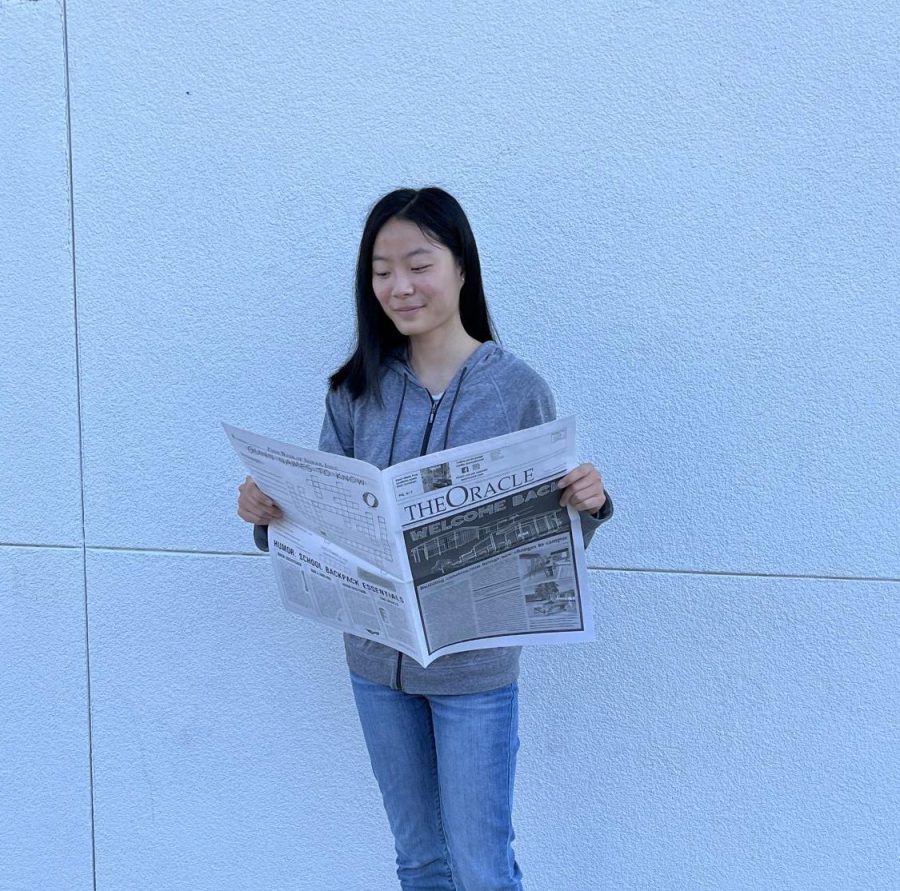 Senior Katie Shih is the Editor-in-Chief of The Oracle and oversees production of the newspaper alongside two managing editors.
For each of the newspaper’s nine yearly issues, Shih works to turn story ideas into compelling reads and rough layout sketches into completed pages. “[As] Editor-in-Chief, it’s cool to see each page evolve and change,” Shih said. “It’s rewarding at the end of production week when it’s distribution day and we get to see the paper in print.”

When Shih first joined staff during the second semester of her freshman year, she didn’t plan on leading The Oracle staff three years later. “I thought it was scary and did not want to be the Editor-in-Chief at all,” she said. “[Ultimately,] I ended up doing it because The Oracle has been a big part of my high school experience and I wanted to take it a step further.” Shih has set many goals for the year. “My biggest goal is to increase circulation and readership,” she said. “We’ll probably do more advertising on Schoology or have students give us story ideas that they want to see in the paper.”

While one issue of The Oracle takes about a month to assemble, most of the progress happens with print pages during production week, where section editors undergo a process of editing and finalizing layouts. “I think most people don’t know that we stay after school until 9:30 p.m. to put the paper together,” Shih said.

Members of The Oracle have to be flexible in their roles: News Editors might work on sports pages if they’re behind, or a graphics artist might have to edit an illustration that they didn’t initially draw. Shih finds community to be key to this process. “[The staff] is a team inside the classroom and [everyone] has to work collaboratively,” she said.

As one of the few student-run classes on campus, Shih appreciates the unique structure of The Oracle. “We don’t have units or tests,” she said. “We do learn things, but it’s not a class specifically to learn [about] a subject—we work together to [create] something.”

Shih encourages interested students to join the staff. “You get to see your name in print, [which is] a really rewarding process,” she said. “It’s also really cool to be able to see your work in front of you at the end of [publishing].”