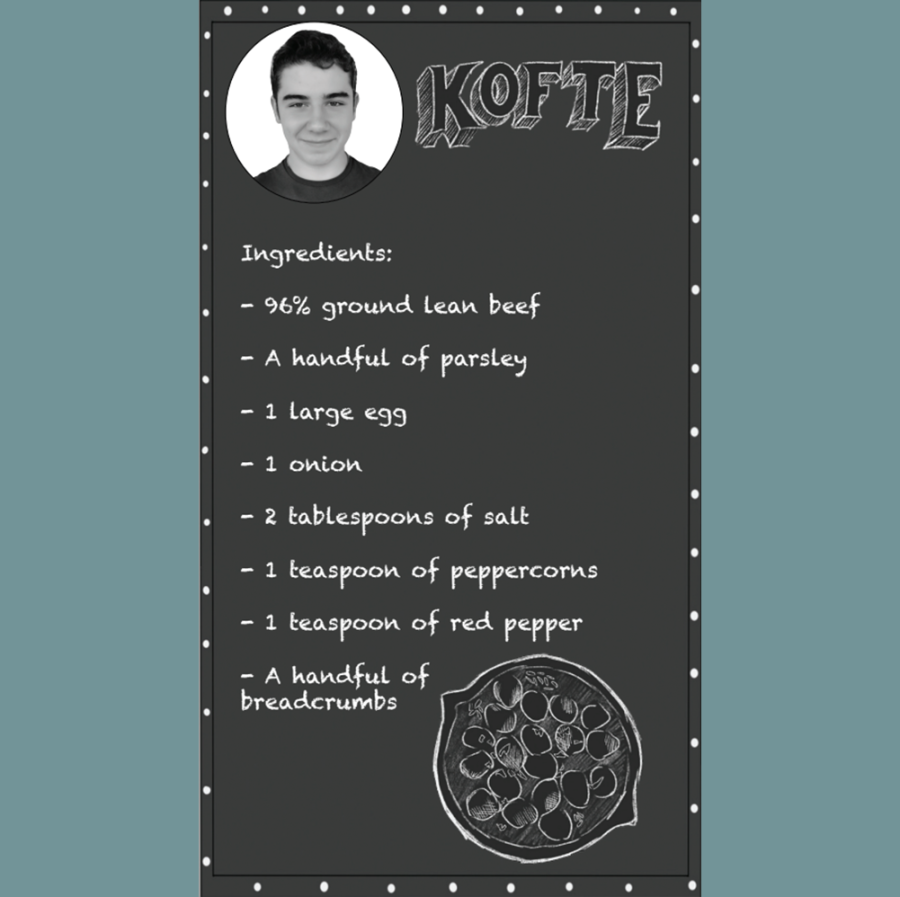 For sophomore Dennis Tierney, köfte isn’t just a dish, but also a memory. Köfte is a traditional Turkish dish that Tierney and his family have been making since as long as he can remember. Tierney was first introduced to the dish [by his grandmother] when he was five years old. He has enjoyed köfte ever since, and made countless memories cooking it with his family. “A really big part of it is the nostalgia,” he said. “It reminds me of Turkey whenever I eat it.”

Being a staple meat dish for Turkish people, köfte is widely cherished by Turkish communities. However, köfte actually does not originate from Turkey, but instead in Persia, or present-day Iran. “Köfte’ comes from the Iranian word “kufta,” which means “to grind,” and is closely related with the way köfte is made. Tierney stresses the importance of knowing the cultural background of the foods one eats. “In order to truly enjoy a dish, you need to know that [history] first,”he said.

Köfte is ground meat mixed with bread crumbs, minced onion and a variety of spices, shaped into little spheres and cooked. “Köfte is not like spaghetti and meatballs,” Tierney said. “The ingredients are not the same, and [köfte] is a main dish.” Contrary to how meatballs are side dishes served along with spaghetti, köfte is meant to be enjoyed alone.

The Tierneys add their own modifications to the recipe to better suit their tastes and wholeheartedly agree that their additions set it apart from other traditional recipes. Köfte is typically made with fatty meat, such as pork, but the Tierneys substitute it with 96% lean beef. “It is more protein rich and healthy,” Tierney said. “It’s much more delicious.” A handful of parsley is added into the beef, giving it color and texture—and a tang of acidity. “Some people add in lemons, but we prefer parsley,” Tierney said. After the beef, egg is added into the mix, helping the parsley and beef blend together. Then, chopped onion is added, further contributing to the dish’s flavor. “Remember to chop the onion up before [mixing it],” Tierney said. “We forgot to do that once, and the köfte didn’t turn out pretty.”

After that, two tablespoons of salt are sprinkled into the mixture. “Now, [many] people do this, but we add a teaspoon of pepper, red pepper and peppercorns,” Tierney said. The last ingredient to finish the köfte is bread crumbs. “We add enough so there is a [crisp] outside,” he said.

These ingredients are mixed by hand, and the köfte is cooked in an unorthodox way: by grill. The grill is turned on to high heat, and the köfte is placed onto the grill for 10 minutes on each side. “We also grill the edges of the köfte, to make it crispier,” Tierney said. Finally, the balls are removed from the grill and sprinkled with lemon juice or lime zest.

Tierney always looks forward to when he gets home from school and is able to enjoy a plate of fresh köfte with the company of his family. He treasures moments like these because they won’t last forever. “It sounds cliché, but the reason köfte tastes so good is because my family eats it with me,” he said.